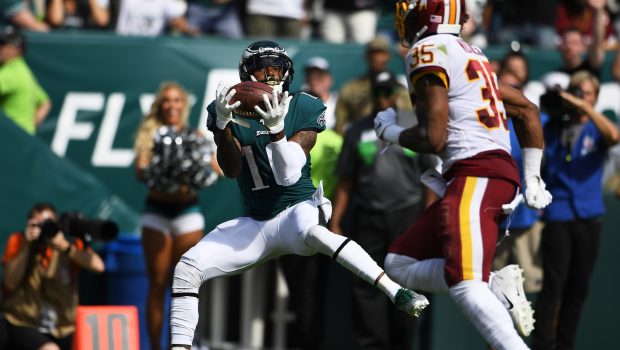 A lack of wide receivers, and specifically Desean Jackson, due to injury created a season in which running back Miles Sanders led the team in receiving yards on passes 20 or more yards downfield. It’s hard to have an effective passing game when that is your reality. Jackson should be back and healthy in 2020, but the Eagles could still benefit by adding a speedy receiver or two this offseason.

The cornerback position provided subpar play for much of the year. Rasul Douglas, Avonte Maddox, Ronald Darby and Jalen Mills all finished the season with Pro Football Focus grades below 60.0, and Darby had one of the worst coverage lines of any cornerback in the league with 17 yards allowed per reception and a 117.9 passer rating into his coverage. Adding cornerbacks and safeties who can positively impact the most important aspect of defense in today’s NFL — coverage — will be key for Philly this offseason.

One thought on “EAGLES NO-BRAINER NEEDS: FIELD-STRETCHER AND CORNERBACK!”