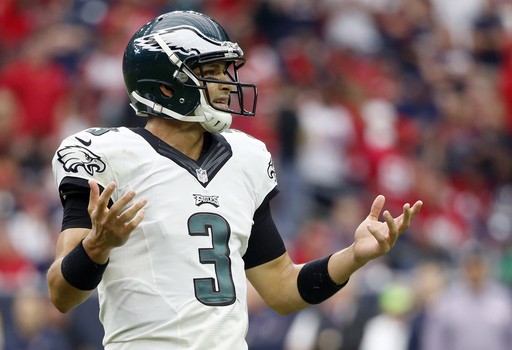 Among Eagles fans’ greatest nightmare scenario for today’s Jets game at the Meadowland is:

Mark Sanchez being forced into action as quarterback!

The way Sam Bradford is playing, this actually might not be an outrageous prediction.

Midway through the third quarter of the Eagles’ loss to the Dallas Cowboys last week, its offense had put up less total yards (34) than the Cowboys had run plays (44)!

Through two games, Bradford has led his team to an average of 17 points while throwing two touchdowns compared to four interceptions.

The interesting dynamic here is that Eagles head coach Chip Kelly seems to still be all aboard the Bradford hype/hope train.

The Birds are posed with the difficult test of traveling to New Jersey to take on a New York Jets team that’s riding high after opening the season with two consecutive wins.

Bradford himself will be going up against a Jets defense that has forced eight turnovers from the quarterback position in two games. The simple math tells us that he’s on pace to turn it over at least that amount of times against an elite-level defense.

The reality of the situation here is that Philly needs to get in the win column after two bad performances. If it means benching Bradford for Sanchez, then so be it.