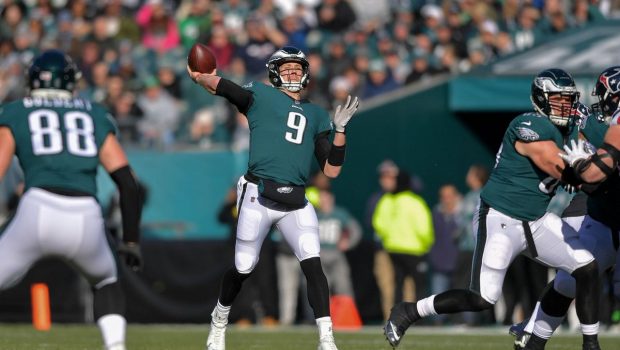 EAGLES NICKY NICE IS TEEING UP A BIG-BUCKS FA 2019 CONTRACT!

If Nick Foles were a stock, its value would be at a 52-week high.

There’s a lot of hype around Nick Foles right now.

And he wasn’t that good early on in the season.

Foles from December onward is better than Tom Brady, as he proved last February 4 in Super Bowl 52 where the Birds won the Super Bowl and Nicky won the MVP.

It’s crazy that when the lights become the brightest, Foles steps in to lead the Eagles to huge wins.

The Eagles still have a chance to make the playoffs this year. Foles could even lead them to a victory or two.

It doesn’t matter what he does.

He is not staying in Philly with a $20 million cap hit and Carson Wentz on the roster. Wentz is the future of the Eagles. He’s better than Foles when he’s not injured. Foles is gone next year.

The Jaguars are the first team that comes to mind. They are getting rid of Blake Bortles. Joe Flacco is probably the best choice there. He’s been on defense-focused teams. He can take big shots when the Jacksonville running game sets things up. It’s almost a no-brainer.

The Jaguars could also sign Foles to a two to three-year deal and draft the best quarterback available since they will be at the top of the draft. Of course, Herbert isn’t there anymore so they’d have to take a chance on Dwayne Haskins — if he declares for the draft — or Drew Lock from Missouri. The Dolphins are another obvious option for Flacco if Miami moves on from Ryan Tannehill.

The decision simply comes down to what type of quarterback teams want. Foles is more of a stopgap transition QB. Flacco is going to want to be the undisputed man wherever he signs. Both are going to be available so it leaves quarterback-needy teams with options.