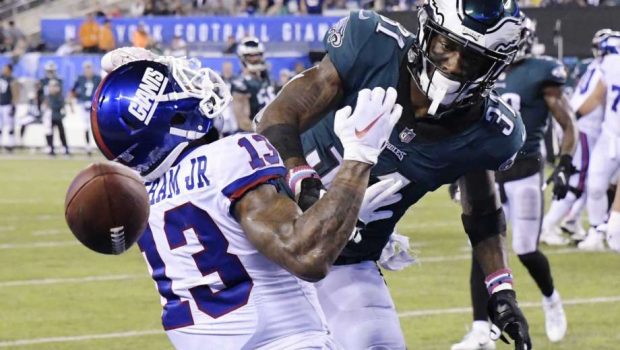 So, Mike Florio of Pro Football Talk speculated yesterday that the Eagles might be interested in wide receiver Odell Beckham Jr.

Even though the 30-year-old OBJ was shunned by the Cowboys because he is not completely healthy after an ACL suffered in the Rams Super Bowl win.

So, the obvious OBJ question yesterday was posed to Eagles coach Nick Sirianni:

“Really happy with the room that we have,” Sirianni said.

The Eagles have five receivers on their 53-man roster: A.J. Brown, DeVonta Smith, Quez Watkins, Zach Pascal and Britain Covey and an 11-1 record behind the strength of a top offense and an MVP-candidate quarterback in Jalen Hurts.

“And then you have Zach Pascal, who is very critical to a team, the type of play he brings. And then your fourth has to be a special teams contributor, which Zach is. And he’s got to be willing to do the dirty work and back up every single position, which he does and have a specialty role, which he does as well. And then your fifth guy better play special teams. And our fifth guy (Britain Covey) is our returner, who had his best game as a professional last week. I’m really excited about that room. I’ll leave it at that.”