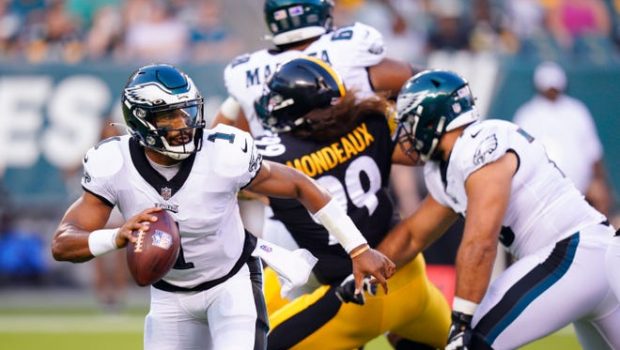 EAGLES NICK ON HURTS: ‘HE WAS IN COMPLETE COMMAND OF OFFENSE!’

On his first attempt at yesterday’s practice Jalen Hurts hit Quez Watkins on a slant route off play-action right through the teeth of the defense.

Quez turned on the jets and took off, with Hurts raising his hand in celebration on a play he thinks would have gone to the house.

After a Darius Slay pass breakup against Dallas Goedert (a play that Nick Sirianni celebrated with the star corner), Hurts hit Travis Fulgham over the middle of the field.

Fulgham went up with full extension for the reception. Hurts later dropped in a nice throw to J.J. Arcega-Whiteside on a crossing route for a big play

“Gosh, you know, I thought he played better than I even thought when I got into the room on Thursday night. I just thought he was in complete command of the offense.”#Eagles #JalenHurts pic.twitter.com/1c3G19zhcu