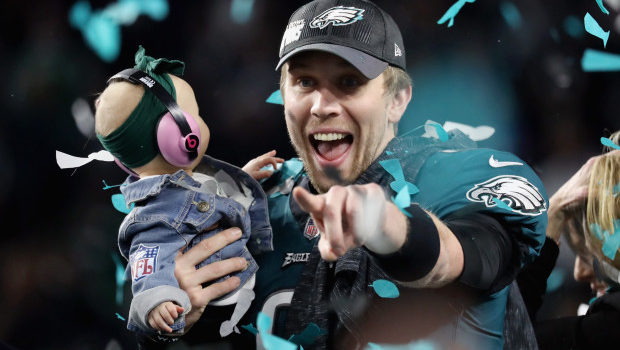 WHY IS EAGLES NICK FOLES SMILING? CHECK OUT HIS BONUS DEAL!

No wonder Eagles Super Bowl MVP quarterback Nock Foles is smiling in his photo above.

You would too if you had his bonus deal:

$250,000 for each game in which he plays one-third of the snaps as part of his restructured deal with the Eagles, a league source told ESPN.

Foles can earn an additional $250,000 for each game in which he plays at least 33 percent of the snaps and the team wins, amounting to a maximum value of $8 million, according to a league source.

Quarterback Carson Wentz has taken part in the team’s beginning portions of organized team activities as he eyes a return to the field as soon as Week 1, but if he is not fully healed from the left ACL/LCL injury suffered in December 2017, the team is prepared to turn to Super Bowl MVP Foles.

The Eagles and Foles agreed to a reworked contract this offseason that includes $14 million in incentives, the specifics of which are largely tied to him being a regular starter for much of the 2018 season.

Over the course of the season, if Foles plays at least 33 percent of the total snaps and Philly makes the playoffs, he earns $1 million, while that figure escalates to $1.5 million if he plays at least 50 percent of the snaps. He also has a $500,000 incentive for making the Pro Bowl on the original ballot.

If Wentz is able to start the season opener, Foles’ chances of earning any of these incentives dramatically diminish, but he will still make a $4 million base salary, and he collected a $2 million signing bonus upon agreeing to the restructured deal. However, if Wentz’ injury prevents him from playing early on in the season, Foles has a chance to start collecting a substantial amount, especially with the Eagles profiling as one of the top teams in the league entering this season.