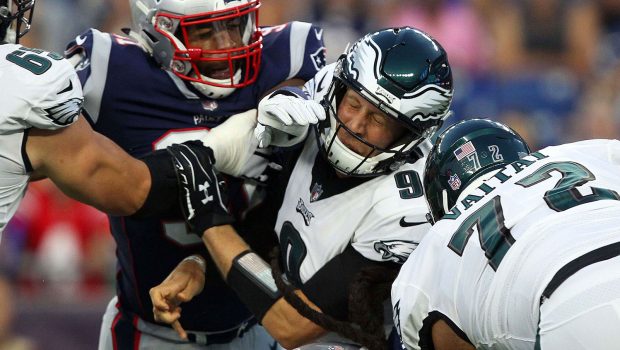 EAGLES NICK FOLES IS OK AFTER SCARY HIT AGAINST PATS!

It turns out the Eagles quarterback Nick Foles’ shoulder is fine after a scary hit he took Thursday night against the Pats.

The Eagles announced a strained shoulder for Foles after a strip-sack by Adrian Clayborn on Thursday night. Foles said afterward that his shoulder “feels all right, feels pretty good.”

The Super Bowl MVP immediately grabbed his right arm after being hit by Clayborn as he took his arm back. He headed directly to the medical tent after Patriots linebackerJa’whaun Bentley returned the loose ball 54 yards for a touchdown.

Foles did not play in the first preseason game with an upper body injury.

Starter Carson Wentz did not play in either game as he continues to work his way back from the knee injury that prematurely ended his season and opened the door for Foles to star in the postseason.