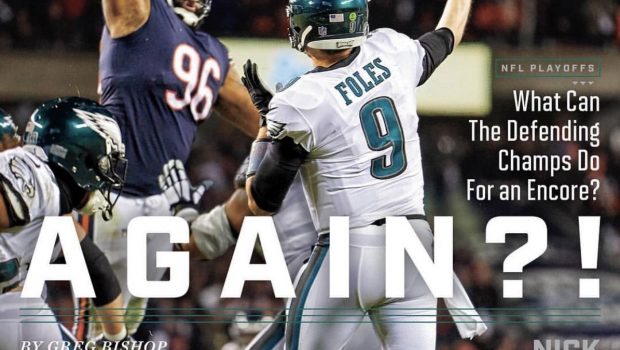 EAGLES NICK FOLES IS BEST QB IN THE NFL WHEN THE HEAT IS ON!

You want to know why the Eagles, who were left for dead at 4-6 after getting blown out by the Saints on Nov. 10, are one win away from the NFC title game?

Nick Foles can take the heat!

Foles had a passer rating of 90.6 on plays when he was pressured during the 2018 season, according to Pat Thorman of Pro Football Focus.

That was the best in the NFL of the 38 quarterbacks with enough passes under pressure to qualify.

Foles was actually even better under pressure than those stats suggest, however, because Foles also doesn’t take many sacks.

A quarterback could boost his own passer rating if he took a sack every time he was pressured, rather than ever throwing the ball away or into coverage.

But Foles is excellent at avoiding sacks — much better than Carson Wentz, playing behind the same offensive line. During the regular season Wentz was sacked almost twice as frequently as Foles, and in the first postseason game Foles was sacked just once while throwing 40 passes. And that was against a Bears defense that had sacked opposing quarterbacks about once out of every 12 pass attempts in the regular season.

On Sunday against a good Saints pass rush, the Eagles are going to need Foles to keep playing that way. If Foles can lead the Eagles to a win against a Saints defense that intercepted Wentz three times and sacked him three times in a 48-7 beatdown in the regular season, that will lead to increased talk that the Eagles’ best quarterback is their backup.