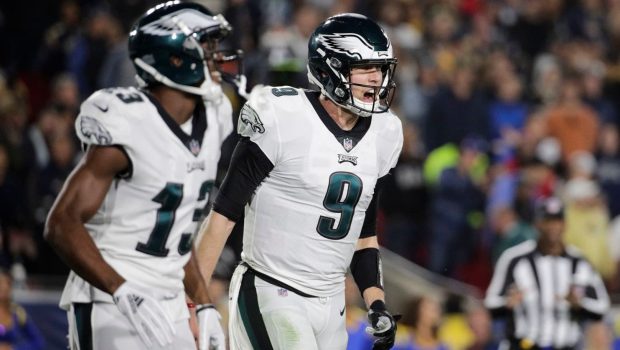 The Eagles reworked Foles’ contract in the days leading up to April’s NFL draft.

In addition to raising the Super Bowl MVP’s 2018 compensation by $2 million through a signing bonus, more substantial and easily achievable incentives replaced the existing ones. The total value of the incentives increased from $2.5 million to $14 million.

Most notably, an incentive paying Foles $250,000 for every game in which he plays at least 33 percent of the offensive plays where there’s an additional $250,000 in a Philly win was added. It appeared as if Foles was only going to make $750,000 from this clause for his two starts at the beginning of the season while quarterback Carson Wentz was still recovering from tearing multiple ligaments in his left knee late last season.

Foles picked up $500,000 in an upset win over the Rams on Sunday night. He started because Wentz has a stress fracture in his back, which should sideline him for the rest of the season. Wins over the Texans and Redskins, games in which the Eagles will be the favorite, could put the Birds in the playoffs with a 9-7 record.

For playoff games in which Foles’ offensive playtime is 33 percent or above, the base incentive amount is $500,000 and $1 million total for a win. Foles has another incentive where he gets $1 million for playing 33 percent or more of the offensive snaps in the regular season and the Eagles make the playoffs. The amount increases to $1.5 million at 50 percent. Foles is likely to end up just shy of 33 percent for the season. He also has a $500,000 Pro Bowl incentive, which wasn’t earned.