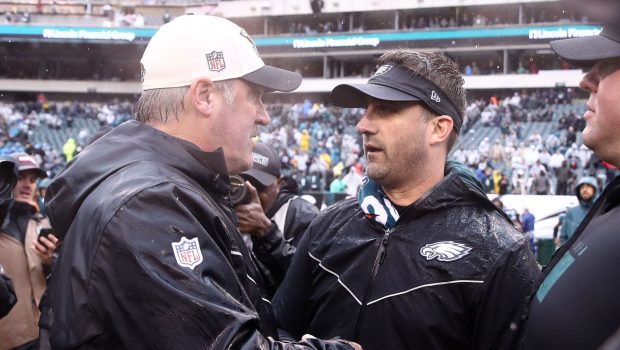 EAGLES NICK AND EX-EAGLE DOUG IN VEGAS MIX FOR COACH OF YEAR!

A few weeks ago, Nick Sirianni was a -400 favorite to win NFL Coach of the Year.

Since then, Jalen Hurts missed two games due to injury and the Eagles lost both games.

Now, Sirianni is no longer the favorite to win the award:

Kyle Shanahan and the 49ers have not missed a beat despite the fact that they’re down to their third-string quarterback who was the last player selected in the most recent draft. That’s a testament to the foundation and system that Shanahan has installed. Shanahan is the current betting favorite to win the award as his team is likely to enter the playoffs on a ten game winning streak.

You can argue that nobody has done more with less than Brian Daboll. The Giants were an absolute mess for half a decade before he got this job and most of the football world, myself included, thought that Daniel Jones was entering his final season as an NFL starting quarterback. Instead, Jones has had a very solid season despite having no big-name pass catching weapons and the Giants are going to the playoffs.

If the season was three weeks shorter, Sirianni would likely have this award in the bag. However, his Eagles have gone 0-for-2 on chances to clinch the No. 1 seed in the NFC without Hurts. What was just a one-loss team is now a three-loss team, which is still an incredible accomplishment but a little less eye-popping.

Doug Pederson’s Jacksonville Jaguars are favored to win the AFC South after a three-win season in 2021. Trevor Lawrence has taken significant strides under the tutelage of Pederson. In most years, Pederson would be a strong candidate but he’s a bit more of a long shot this year due to the performances of the coaches above him.

Sean McDermott was a viable candidate to win this award before this past week as his Buffalo Bills had a good chance of securing the No. 1 seed in the AFC. On top of that, in the face of unprecedented circumstances with the Damar Hamlin situation, McDermott exemplified what it means to be a leader this past week.

There’s still a week to go and the narrative on these coaches can certainly change based on what happens on the field in Week 18. On top of that, it’s not an award based on stats but more based on narratives and expectation. That makes it one of the tougher awards to handicap.