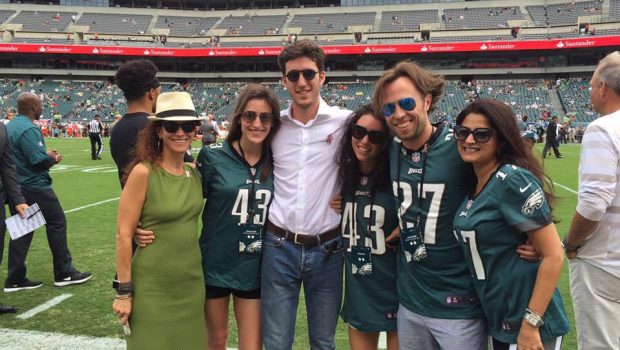 It may not have been news to everyone, but it was to us when the Inky devoted a bazillion words yesterday to the Eagles analytics department and how algos have become just as important as real-live scouting.

The Jeff McLane treatise included what is assumed to be the fact that after Jeff Lurie gives up the reins of the Eagles, whom he has owned since 1994, his son Julian (center in above photo) is next in line:

When Julian Lurie presented to Nick Sirianni and other prospective coaches a report based on analytics and asked for an assessment of the data, according to sources who were either present or had direct knowledge of the Eagles’ interview process, it wasn’t viewed as an extreme reach.

The Harvard alum had already completed a two-year rotational internship with the NFL from 2017-19 and his inclusion was just the latest step as the elder Lurie grooms his son for a senior position and eventually to succeed him as chairman and CEO.

“He’s paying his dues and learning the business,” an Eagles source said.

But that he would do so at the expense of Alec Halaby, the Eagles’ vice president of football operations and strategy, was peculiar.

Leadership did select a committee that wasn’t made up entirely of senior-level staffers as it wanted a diverse set of viewpoints.

Halaby, though, has long been a polarizing figure in the organization.

He was Roseman’s hire and over his 14 years with the Eagles has become a trusted adviser to Jeffrey Lurie.