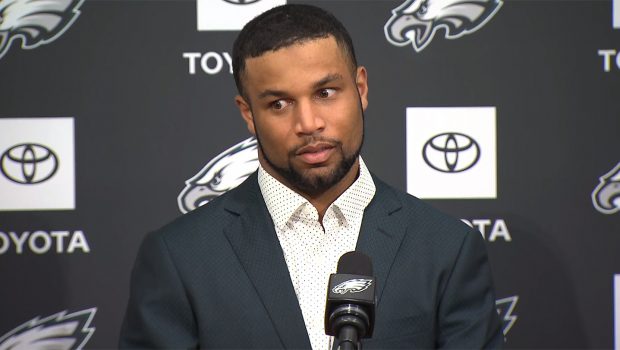 EAGLES NEWBIE GOLDEN TATE: ONLY A WINNER GOES TO DINNER!

“I just want to win,” new Eagles wide receiver Golden Tate said yesterday at his introductory press conference. “That’s why they traded [for] me. That’s why you all accepted me here — to win games. I don’t know how I’ll fit in, but I’m open minded.”

Golden Tate is on pace for his first 100-catch season and his fourth 1,000-yard season in the past five seasons. However, after the trade from the Lions to the Eagles, Tate may not reach those lofty numbers.

“My job is going to be to learn this material and this system as fast as I can, learn my teammates, try to find a way to bond with these guys pretty quickly,” Tate said. “I don’t get the offseason and the OTAs and all that. I kind of missed all that [with the Eagles]. I’m going to be working hard just to try to fit in. I want to do whatever is going to help this team win. I’m not coming here demanding anything. I just want to learn it. When an opportunity falls in my hands, I want to make a play.”

Tate is in the final season of a five-year, $31 million deal he signed with the Lions in 2014 and scheduled to become a free agent in March.