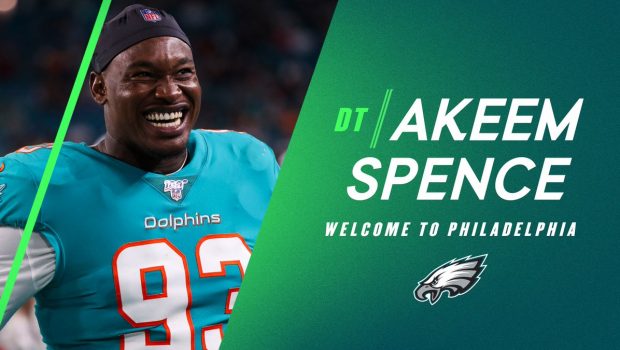 EAGLES NEWBIE AKEEM SPENCE HAS PITY FOR HIS FORMER DOLPHINS!

Akeem Spence feels great relief that he was released by the Dolphins in late August and wasn’t part of last Sunday’s 59-10 loss to the Ravens.

Then, on Monday his agent told him that the Eagles were interested in signing him after losing Malik Jackson to a foot injury.

“It just so happened, around 3 or 4, I’m taking my clothes to the cleaners, I see my agent called me,” Spence told the Inky. “He asked me, how would I like the opportunity to be on a Super Bowl contender? I said, ‘Who wouldn’t?’”

Spence called the Eagles a “first class” organization and said playing the Eagles system with former Dolphins defensive coordinator Matt Burke is “the perfect fit for me.” He suggested that playing in Miami in 2019 was on the extreme other end of the spectrum for his former teammates.

We’ve heard that some Miami players would like to join Spence as ex-Dolphins, but the Eagles and Dolphins will meet on December 1 should any Dolphins want to show Spence where he can stow his pity.