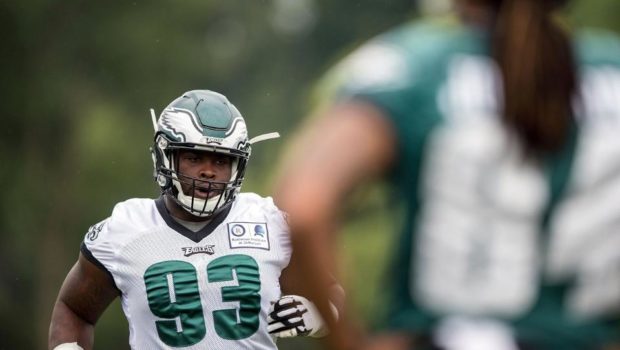 EAGLES’ NEW DT TIMMY JERNIGAN ‘LIKE ADDING ANOTHER NO. 1 PICK!’

Yes, the Eagles added first-round pick Derek Barnett to upgrade their pass rush, but trading for Jernigan was an under-the-radar addition every bit as important as signing running back LeGarrette Blount.

“I do like the guys we have up front,” Schwartz said Tuesday. “It’s not just drafting a guy like Derek [Barnett] or bringing a guy like Chris [Long] in. I think Tim Jernigan is really going to be a big addition for us. He was hard to handle inside.

“Last year when (Fletcher Cox) had such a good start, that first month, teams adjusted. They started taking him away, and we didn’t win enough one-on-ones away from him because that other tackle got the one on ones. Well, that happened in OTAs, and Timmy’s able to get good pressure.

“I don’t know if it flew under the radar, but it was an important acquisition for us. I think that will affect our pass-rush as much as bringing a first-round draft pick or veteran player into the mix.”

Don’t be surprised if Jernigan thrives in his contract season in Philly. The 24-year-old lineman owns fantastic penetrating ability, which meshes perfectly with Schwartz’s defense. Jernigan underachieved in Baltimore’s two-gap scheme, but should shine in Philly next to Cox.

There are questions on the back end of the Eagles’ defense heading into 2017. If Jernigan and Barnett live up to their billing, the Philly pass rush could negate many of those deficiencies in the secondary.