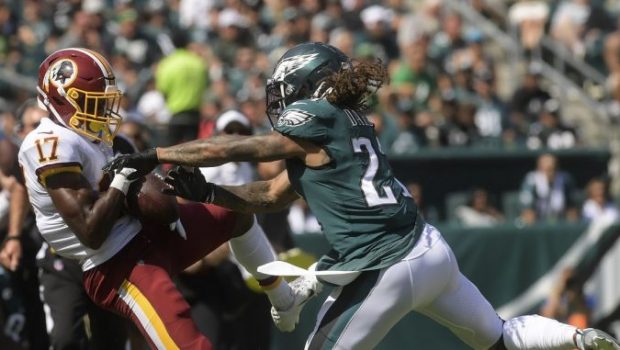 The Eagles never saw the best of Ronald Darby, whom they acquired in 2017 to shore up their secondary.

For the 5-11, 193-pound Darby, his deal with the Redskins is a chance to prove he can still be the player he once was.

The Bills recognized his potential in 2015, when they drafted him in the second round out of Florida State and he became one of the NFL’s best defensive rookies. During training camp in 2017, the Eagles acquired him for wide receiver Jordan Matthews and a third-round draft pick.

The Eagles had lofty expectations for Darby, and when he was on the field, he at times fulfilled them. He intercepted six passes, defensed 32 and helped hold off the New England Patriots in the Eagles’ victory in Super Bowl LII. But more often, he struggled — such as in Week 1 last season, when Redskins rookie wide receiver Terry McLaurin had five catches for 125 yards and a touchdown while primarily lining up opposite Darby (above) — or battled injuries to his right ankle, right knee and hip. Darby sat out nearly as many games (20) as he played (28) during his time with Philadelphia.

In 2019, he signed a similar one-year contract with the Eagles for $8.5 million. Despite missing five games in the middle of the season with the hip injury, he started 11 games and was serviceable. Darby didn’t find as robust a market this year, perhaps because of a deep draft class of cornerbacks, so for the Redskins he’s a value add who will make slightly more than what Dunbar would have earned this season ($3.5 million).