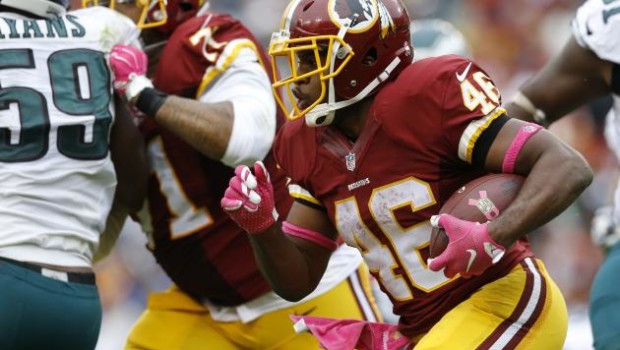 EAGLES NEED TO RUN-STUFF IN ORDER TO BEAT THE REDSKINS!

If there is an area of the Eagles game that needs to right the ship in order for the Birds to win Saturday night against the Redskins, it”s:

Defense against the run.

Philly’s rush defense quickly went from the strength of Billy Davis’ defense to its Achilles’ heel. Inconsistency also plagues this unit as one week it can shut down the talented LeSean McCoy, but then the next week it surrenders three touchdowns to a rookie running back.

Last week, it seemed like the defense focused so much on not giving up the big play through the air that it failed to stop anything else. David Johnson consistently found running room as he averaged 6.7 yards per carry on his 28 attempts.

A large part of Philly’s struggles against the run comes down to the declining play of Bennie Logan. The big run-stopping defensive tackles has been dealing with a nagging ankle injury through the last few weeks, and now his availability is in question for this weekend due to a calf problem. However, he is not the only problem as inside linebackers DeMeco Ryans and Kiko Alonso have failed to make any positive impact on games the entire second half of the season.

On the other side, Washington takes advantage of poor rushing defenses, as it stays committed to its ground game. The Redskins ran for over 100 yards in each of the last four weeks, and they face a favorable matchup against Philadelphia this weekend.

The Birds enter Week 16 with the third-worst rushing defense in the NFL as it gives up 134.1 yards per game on the ground. When these two teams played each other in Week 4, Alfred Morris and Chris Thompson combined for 115 yards on 23 carries. While the Eagles show the tendency to abandon the run after initial struggles, the Redskins try to stick to a balanced attack as they ran the ball a total of 32 times in the first matchup.

The Eagles need the middle of their defense to step up and the entire team to improve its tackling if they hope to slow down Washington’s running backs. A consistent ground attack will only make life easier for Kirk Cousins against Philly’s depleted secondary.