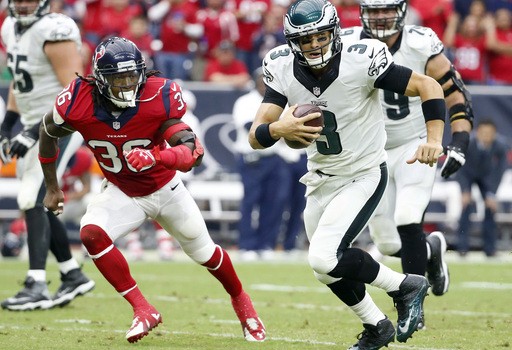 EAGLES NEED SANCHEZ TO ACHIEVE A MARK OF EXCELLENCE

But the question as the Birds hit the halfway mark of the season at 6-2 is how far can Sanchez take them? After his performance on Sunday, the Eagles are confident they’ll be fine with Sanchez at quarterback.

Sanchez replaced Foles, overcame turnovers and did enough to keep the Eagles in first place with a 31-21 win over the Houston Texans. Foles hurt his left shoulder late in the first quarter, and Sanchez came on to threw for 202 yards and two touchdowns.

“He’s good,” running back LeSean McCoy said. “Even when he came here it’s hard to look at him as a backup because of (the) success he’s had and experience. I think today wasn’t really something surprising to the team.”

“I think we’ll do some damage if Nick can’t go,” McCoy continued. “He’ll step in there and do a great job.”

Sanchez, who also threw two interceptions, missed all of last season after tearing the labrum in his right shoulder in the preseason. He last played on Dec. 30, 2012, with the New York Jets.

The Eagles (6-2) led by 3 when Jeremy Maclin grabbed a low throw from Sanchez for an 8-yard touchdown to make it 31-21, sealing the win with about four minutes remaining.

Sanchez didn’t waste any time in his Philly debut, finding Maclin deep on his first play for a 52-yard gain. Five plays later, he threw a perfect pass to Jordan Matthews for an 11-yard touchdown to make it 14-7 in the second quarter.

He admitted to being a bit nervous before the throw to Maclin. Those butterflies dissolved after that strike.

“You want to get the first throw out of the way. And thanks to Chip we throw it right down the field,” Sanchez said. “So that will get your nerves gone.”

Coach Chip Kelly didn’t provide many details of the injury to Foles, saying only: “He’s in a sling right now, and that’s all I got.”

Ryan Fitzpatrick threw for 203 yards with two touchdowns and an interception for Houston (4-5). The Texans had trouble getting their offense going.

“It was a tough day, and obviously that falls on the quarterback in terms of not being able to get things started and accomplished,” Fitzpatrick said.

Maclin finished with two touchdowns and 158 yards receiving and McCoy had 117 yards rushing.

The Eagles were up by 10 and driving late in the third quarter when Jumal Rolle grabbed his second interception of the game.

DeMeco Ryans intercepted Fitzpatrick at the Philadelphia 10, but was injured on the play and fumbled the ball as he fell to the ground. DeAndre Hopkins recovered for Houston and scored on a 7-yard reception two plays later to cut the lead to 24-21.

Houston’s defense got to the quarterback early, with four sacks in the first half. The Eagles had allowed just two in the previous six games.

Whitney Mercilus sacked Foles twice in three plays, driving him hard into the turf on the second one to send the quarterback to the locker room.

Houston tied it at 14-14 when Arian Foster grabbed a 56-yard TD pass about four minutes before halftime. That score was set up when receiver Josh Huff tipped a pass by Sanchez that was intercepted by Rolle.

Foster left late in the game and coach Bill O’Brien said he injured his groin and that he hoped he’d be OK after an extra week of rest with the bye next week.

A 45-yard field goal by Cody Parkey gave the Eagles a 17-14 lead at halftime.

Houston missed a 39-yard field goal in the third quarter. The Eagles used four straight running plays capped by an 8-yard run by Chris Polk after that to extend their lead to 24-14 with about three minutes left in the third.