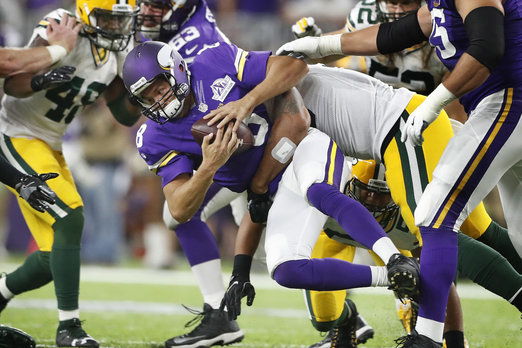 EAGLES NEED TO KNOCK VIKES’ SAM BRADFORD ON HIS ASS!

The Eagles will increase their chances of beating the Minnesota Vikings today at the Linc if:

They chase Sam Bradford and knock him on his bony ass.

Even as the Vikings enter Week 7 at 5-0, there’s no mystery about the biggest vulnerability of the NFL’s lone undefeated team.

An overextended offensive line with both starting offensive tackles on injured reserve could be costly for a team that has weathered a series of early season blows.

Now the unit will have to find a way to stand up to the Eagles’ formidable front four to keep quarterback Bradford protected against his former team.

A bye week gave Vikings coach Mike Zimmer time to retool, and the team added veteran offensive tackle Jake Long. But Minnesota will have to find a way to stand up to an Eagles defense that can generate pressure with its front four alone.

Eagles coach Doug Pederson and defensive coordinator Jim Schwartz will demand more from their line after it gave up 230 rushing yards and struggled to pressure Kirk Cousins in a 27-20 loss to the Washington Redskins last week. Defensive tackleFletcher Cox is looking to recapture the disruptive form that earned him NFC defensive player of the month honors in September.

With Philly relying on its pass rush to provide a spark, the Vikings will be counting on Bradford to keep his cool. He hasn’t thrown an interception in 125 pass attempts this year, and the offense has yet to commit a turnover.

The Eagles have their own concerns up front on offense. Right tackle Halapoulivaati Vaitai was overwhelmed in his first start last week against the Redskins, and the Eagles allowed Carson Wentz to be sacked five teams. Those woes could spell trouble against a Vikings defense tied for third in sacks with 19.