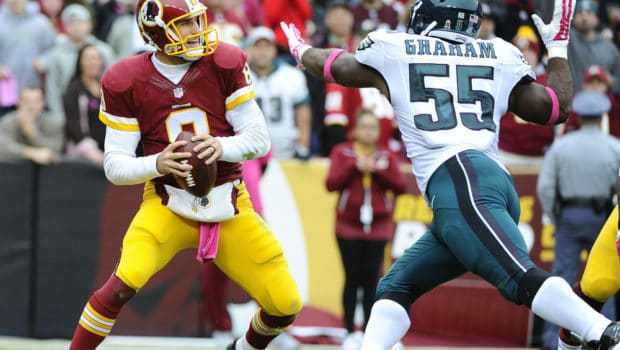 Why is the otherwise ordinary Redskins quarterback Kirk Cousins so good against the Eagles?

Cousins has been an average quarterback in the NFL against most teams, yet somehow he always finds his groove against the Birds.

The Eagles never fail to make Cousins look like a top-flight NFL quarterback: 13 percent of all his passing yards have come against Philly. He averages almost a full 100 yards more per game passing compared to all other teams he’s played. He’s also been incredibly safe with the football, throwing just one interception in three games.

Head coach Doug Pederson acknowledged that Cousins struggled at the beginning of the season, but has since settled into a groove.

It will be up to Jim Schwartz and the defense to make him uncomfortable early, which should lead to turnovers as the game wears on—25 of Cousins’ 34 interceptions have come in the second half, including 14 in the fourth quarter.