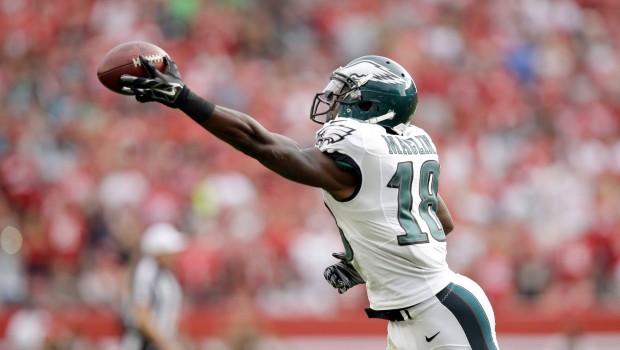 EAGLES NEED TO DO A LONG-TERM DEAL WITH MACLIN PRONTO

It is hard to believe that Eagles’ WR Jeremy Maclin was left off the Pro Bowl roster, and the same can be said of DE Fletcher Cox, whom coach Chip Kelly said today “may have been our MVP.”

The fact is the Eagles have to make some time right away to getting Maclin signed to a long-term deal. And if Maclin has his way, he wants to stay here too..

Betting on himself before this season with a one-year, $5.5 million deal, the Eagles wide receiver hopes his sensational season will prompt Philly to offer a long-term pact.

“Yeah, this is a great place to be,” Maclin said this week, per Sheil Kapadia of PhillyMag.com. “I’ve always spoken the best about this organization. Everything (owner Jeffrey) Lurie or (general manager) Howie (Roseman) or (coach) Chip (Kelly) has told me has always been true. So why wouldn’t I want to be here? This is the place that drafted me, and I want to end my career here. If we can get something worked out when the time is right, then that’s what’ll happen.”

With a team-leading 82 receptions for 1,269 yards and 10 touchdowns through 15 games, Maclin has carried an Eagles receiving group that sorely misses DeSean Jackson. There’s plenty of potential in rookie Jordan Matthews and tight end Zach Ertz, but the Eagles can’t expect Riley Cooper to lead the way at wideout.

Coming off last year’s season-ending knee injury, Maclin has done everything the team could have asked for in 2014. As an ideal fit for Kelly’s offense, the 26-year-old wideout is going to get an offer from the Eagles. Whether Maclin is serious about sticking around, though, will boil down to what other suitors are willing to fork over.