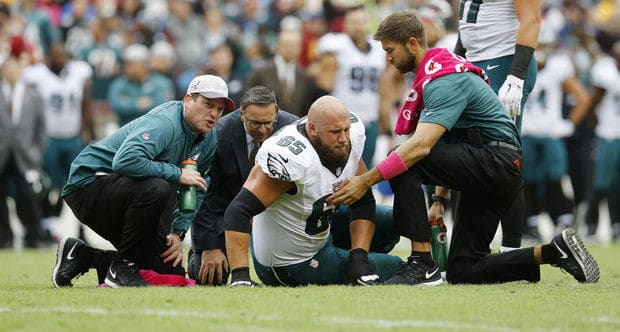 EAGLES NATION HOLDING ITS BREATH: RT LANE JOHNSON WILL HAVE MRI ON KNEE

For the Eagles, the hits on the already thin offensive line just keep on comin’!

Right tackle Lane Johnson will undergo an MRI this morning after he reaggravated a knee injury in Sunday’s 23-20 loss to the Washington Redskins.

He left the game momentarily in the second half, but returned to the field for the rest of the game.

“I think I re-sprained my MCL,” Johnson told NJ.com.

“It’s one of those ‘wait and see deals,’ I’ll have an MRI tomorrow.”

The Eagles are already without right guard Andrew Gardner and are in want of depth up front generally. Johnson, along with left tackle Jason Peters, is the sole bright spot on a unit that has struggled in run and pass protection in equal measure through four games this season.

Peters left the game in the first half. He was limited in practice last week with a quad injury, but told NJ.com after the game that his injury is not serious.