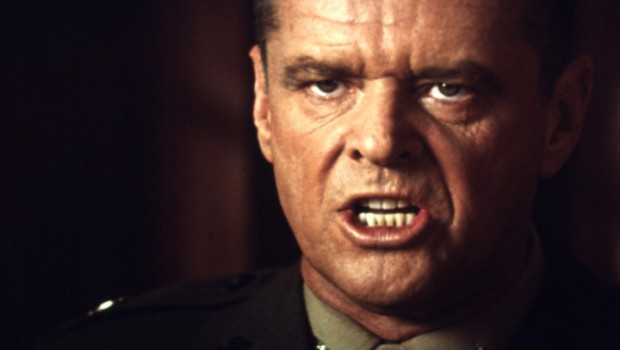 IF EAGLES WERE A MOVIE, JACK NICHOLSON WOULD PLAY CHIP KELLY!

Kelly doesn’t give a damn what you think of his off-season moves. Though even if the Eagles draft Marcus Mariota and land starters at their other remaining positions, they’re still only the third-best team in the NFC after Seattle and Green Bay. But they have surpassed the Dallas Cowboys as the team to beat in the NFC East, especially with the acquisition of Dallas’ prized weapon, DeMarco Murray.

Chip Kelly has completely revamped the Eagles’ roster, and everyone from cops on the beat to clueless radio talk show hosts are pissed off and wondering:

What in the name of Rich Kotite does Kelly think he is doing???!!!

In the words of the Jack Nicholson character in “A Few Good Men,” he doesn’t give a damn that you think he’s doing!

It’s been an offseason unlike any other in franchise history. Kelly has clearly shown that he’s willing to part ways with any player on his roster. It’s not that he hates star players, though. He just isn’t afraid to turn down an opportunity to upgrade.

The McCoy-for-Alonso trade is the perfect example. Kelly looked at McCoy as a terrific—yet flawed—running back who had played well over half of his career and wasn’t the best fit for his system. So he exchanged him for a linebacker who turned in one of the best rookie seasons by a defensive player in recent memory in 2013. Oh, and that player also went to Oregon.

As for Alonso’s ACL tear, Kelly no doubt believes that his sports science system has the ability to keep Alonso healthy for the future.

The same applies for a number of other injury-prone players whom Kelly brought in, notably quarterback Sam Bradford.

The former 2010 offensive Rookie of the Year has missed the last 25 regular-season games with consecutive ACL tears. Trading a second- and a fourth-round pick for a quarterback with Bradford’s injury history, questionable talent level and high salary is a bold move. That is, unless Kelly plans to swap Bradford in a move for Oregon quarterback Marcus Mariota, one of the top players in the 2015 draft.

Newly signed running backs DeMarco Murray and Ryan Mathews have also struggled with injuries. So has new cornerback Walter Thurmond. That makes five offseason acquisitions who have big injury histories, and three of them are expected to play an extremely prominent role in 2015: Bradford, Murray and Alonso. It goes without saying that injuries could make or break the season for Kelly’s Eagles.

In all, it’s tough to know exactly how the Eagles will produce as a team in 2015, but it’s clear that the Eagles upgraded at running back, linebacker and cornerback. They stayed about the same at quarterback. They got a little worse on the offensive line and at safety. And they downgraded significantly at wide receiver.

Of course, the Eagles still have this month’s draft to finalize their team. They could add key players such as Nelson Agholor, Jake Fisher, Byron Jones and Eric Rowe. Or they could pull off the trade of the century and grab Chip’s king duck, Marcus Mariota.

So until the Eagles know who will be starting for their 2015 team at such positions as wide receiver, cornerback, safety and especially quarterback, it’s impossible to know where the Eagles rank among the NFC’s elite teams.

But even if the Eagles draft Mariota and land starters at their other remaining positions, they’re still only the third-best team in the NFC. They have surpassed the Dallas Cowboys as the team to beat in the NFC East, especially with the acquisition of Dallas’ prized weapon from 2014.