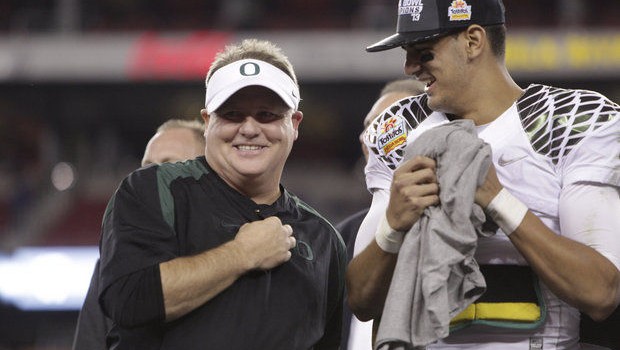 WOULD THE EAGLES MOVE UP TO DRAFT OREGON’S MARIOTA IN 2015?

Kelly and Mariota after the 2013 Fiesta Bowl, after which Kelly signed to coach the Eagles.

Now that Nick Foles has shown his limitations and Mark Sanchez has reverted to the form he displayed in his last, sad days with the Jets, the question is:

Would Chip Kelly and Eagles trade up to draft Oregon quarterback Marcus Mariota in next spring’s NFL draft?

It’s a proposition that is probably too good to be true but a question that piques the interest of Oregon and Eagles fans, according to Oregon.live.

That was the subject of ESPN.com Insider Mike Sando’s recent article, looking at what he calls the most intriguing hypothetical heading into the 2015 draft:

“Moving up and mortgaging your future for a receiver does not make sense, but I’d do it for a quarterback,” a general manager from another team said. “I don’t know if Mariota would be worth it, but he might be for Chip because the hardest part at quarterback is the learning curve. Mariota would be seamless in Philadelphia.”

To be clear, Mariota landing in Philly is a long shot, to the point that I was initially skeptical about engaging the subject at all. But as I gathered insights from coaches and executives around the league on the subject, I realized this was an interesting exercise whether or not the Eagles go down that path. And there is plenty of logic as to how and why such a move could come together.

The Eagles could be picking in the middle 20s or later, and Mariota is in the conversation as the No. 1 overall pick if he comes out. Bridging such a wide gap would come at a steep price.

Sando spoke with opposing coaches, execs and a former NFL player to examine the pros and cons, as well as the probability, of such a hypothetical happening.

Kelly, who left Oregon after going 46-7 in four seasons, took over a Philly team that finished 4-12 in 2012, implemented his system and turned the Eagles into a 10-6 team that won the division and earned a wildcard playoff spot. And he did so with Michael Vick and Nick Foles behind center, making the latter look like an All-Pro in the process.

Because of the success Kelly has had early in his NFL tenure without handpicking a quarterback, those Sando spoke with wonder if the player behind center is as important as the system he’s running:

The Eagles have been a top-10 team in points per drive since Kelly was hired, and only Denver and New England have scored more points over that span. Philadelphia could use its draft capital to upgrade its pass rush and fortify its depth. Multiple planets would have to align for the Eagles to make a move for Mariota, anyway.

“I think some of it would depend on how [Sanchez] plays in Foles’ absence,” a defensive coordinator said. “If he steps up and the offense just continues to roll, then you can say it was the system; it was not necessarily Nick Foles. But if they struggle, I think Chip would be hard-pressed to convince [owner] Jeff Lurie that they need to go with a rookie next season … unless you feel like that guy can get you a Super Bowl.”

Mariota, a redshirt junior, is yet to officially make himself available for the draft and the Eagles are tied atop the NFC East with a 7-3 record. There’s a lot of ball left to play and some important decisions still to be made, but it’s fun to imagine what such a reunion in the NFL could produce.