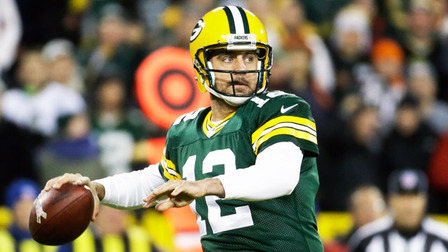 WITH EAGLES ON MONDAY, DELUSIONAL RODGERS THINKS PACK CAN RUN THE TABLE!

The Packers have lost four straight games and five of their last six, but quarterback Aaron Rodgers is confident — or delusional — they can turn things around in time to make the playoffs.

“I feel like we can run the table, I really do,” Rodgers said Wednesday, via ESPN.com. “The offense is starting to click a little bit more; we’ve just got to put together a game where we’re more consistent from the first snap to the last. We’ve been, I think, getting closer to that. We’ve really been clicking, at times, in the last few games.

“But it’s going to be important that we get going early. We had three three-and-outs to start the (Redskins) game, but overall on the season, we’ve done a better job of limiting our three-and-outs; we’ve been sustaining drives pretty well.”

While Rodgers and the offense have struggled to reach the heights they were expected reach to when the season started, the biggest problem — at least in recent weeks — has been the defense, which is mired by injuries.

The Packers have scored 32, 26, 25 and 24 points during the four-game losing streak. Rodgers is still putting up elite numbers with 2,761 yards passing, 25 touchdowns and seven interceptions. Now, he just needs some help.

Rodgers understands any winning streak has to start with the first win. That win can be the toughest, but can also act as a springboard for the rest of the season.

“You just feel like it just takes one,” Rodgers said. “We get one under our belts, things might start rolling for us and we can run the table.”

The Packers will take on the Eagles this week on “Monday Night Football.”