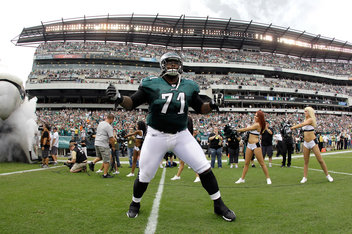 EAGLES’ MINI-CAMP: WON’T TAKE LONG FOR PETERS TO GET IN SHAPE!

Today is June 13, and Eagles’ mandatory mini-camp is underway.

Most reporters will be focused on legendary left tackle Jason Peters, the 35-year-old who was MIA for the voluntary OTA’s.

“He’s never had an issue with conditioning,” line coach Jeff Stoutland said yesterday. “Never. You know what, when he was practicing, we limited some of his plays last year, but even with that said, he would go harder than anybody else. You watch him in all the drill work, he understands. He’s a professional. He understands what it takes.”

Last year Peters had more false start penalties than any linemen in the league with 10. As a team, the Birds committed 26, which is almost two per game. That was the fourth most.

“You can play this game for a million years but if you’ve been away from it for a little bit you still need to go through that,” he said. “That stuff, I’m not concerned about the set lines he takes in protection, he’s the best in the world at that. That’s not the concern. The concern is to get everybody on the same page and work together with the calls, the points, all those things.”

Stoutland was asked if Peters’ false start were a product of perhaps a decline in his athleticism, leading to him moving quicker than he should.

Three times, all in a row, Stoutland said no.

“I think that in this league, if you want to block these guys on the edge, you better get a jump on the snap because they’re getting a jump on that snap,” he said. “So there’s a fine line there. You watch all the 1,000s of other snaps he took and he’s right on the ball, he’s right on it, where some guys are behind. That’s why he’s so good at what he does.”