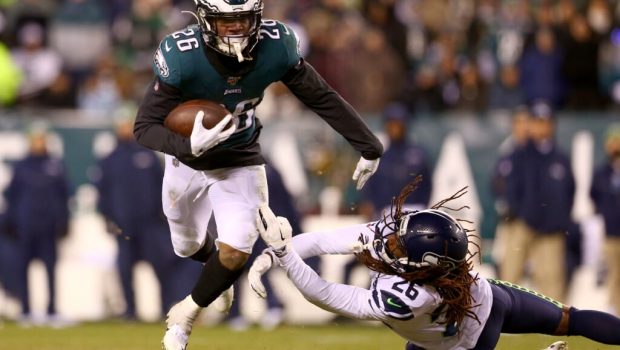 EAGLES MILES SANDERS IS THE COMMITTEE RUNNING BACK OF ONE!

Eagles running back Miles Sanders is now a vet.

So he doesn’t have to show up at NovaCare for training camp until next Tuesday, July 28.

As a rookie, he shared the backfield with Jordan Howard, who got dinged up.

By the time he became the top running back in November, he produced like one of the NFL’s best all-purpose backs.

He was one of only six running backs with at least 650 yards from scrimmage and four touchdowns from Week 11 through Week 17.

Entering his second season, the Eagles’ 2019 second-round pick is poised for a breakout season. Forget about the committee backfield that coach Doug Pederson has used in his first four seasons; Sanders is the featured running back and will be used in a way like no player on the Eagles since LeSean McCoy was traded in 2015. Sanders broke McCoy’s franchise record for most rushing yards by a rookie. Can he top McCoy’s Year 2, when McCoy rushed for 1,080 yards and caught 78 passes? It’s not out of the question, especially because the Eagles plan to fea