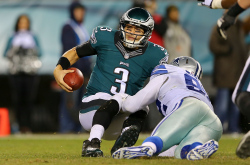 EAGLES MIGHT NOT HAVE SEEN THE LAST OF MARK SANCHEZ

When the Eagles’ season ended late last December, the conventional wisdom was that back-up QB Mark Sanchez, who stepped in for injured Nick Foles and was 4-4, would become a free agent and go elsewhere to find another starting job in the NFL.

So much for the CW.

The Eagles and Sanchez are in talks to stay together for 2015, according to NJ.com.

If Sanchez returns, that means he’s settling for a situation in which he’d likely be a backup again, and maybe even a third-stringer if the Eagles keep starter Nick Foles and draft coach Chip Kelly’s former Oregon quarterback Marcus Mariota or someone else on April 30.

Perhaps Sanchez wants to stay in Philly because he realizes there wouldn’t be many opportunities to start elsewhere.

He was a flop as a starter with the Jets, and if he has to be a backup again this year, he’d likely prefer to be in Philly.