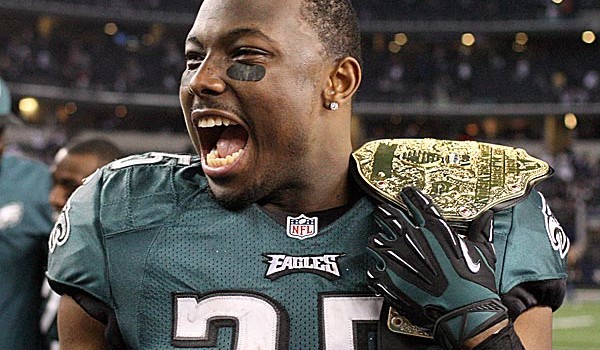 EAGLES' MC COY AND CHIEFS' CHARLES VIE FOR FANTASY NO. 1

We’re talking about Kansas City Chiefs’ Jamaal Charles and the Eagles’ LeSean McCoy (photo above). Much like the years when Shaun Alexander and LaDainian Tomlinson or Emmitt Smith and Barry Sanders were Nos. 1 and 2 off the draft board, you really can’t lose either way, but there are a handful of metrics that suggest Charles might be the safer pick.

Last season, McCoy led the league in carries (314) and touches (366) and was only one of two running backs with at least 300 rushing attempts. The other was Marshawn Lynch (301). Charles, meanwhile, carried just 259 times, had 329 touches and finished as the NFL leader in total touchdowns (19).

Charles also has increased his touchdowns in each of the past two seasons, with 25 combined for 2013 and last year. McCoy set a personal single-season high of 20 touchdowns in 2011 but fell to five in 2012 and 11 last season.

This isn’t to say taking McCoy No. 1 overall would be a poor decision. McCoy thrives in a system ideally suited for his style of running, and you can be all but certain he’ll receive 300-plus touches again.

Plus the Eagles have the fourth easiest schedule based on opponents’ fantasy points allowed to running backs last season. The Chiefs are No. 17.

But Philly didn’t add shifty running back Darren Sproles just so he could sit on the bench all season. Sproles’s lateral quickness and acceleration provide another dimension to Coach Chip Kelly’s high-octane offense, and he’ll no doubt get spot carries that otherwise may have gone to McCoy.

Sproles averaged 140 touches over the last three seasons. He did turn 31 in June, reaching the age where most running backs begin to deteriorate. But Sproles has never had to recover from heavy workloads, never having surpassed more than 173 touches from scrimmage in any season. So while he’s older, he’s probably still got some tread left on his tires.

Sproles’s presence doesn’t necessarily mean McCoy is in danger of seeing his production diminish much, if at all. He’s still the clear No. 1 for the Eagles after leading the league in yards from scrimmage (2,146) last season and finishing second (52) behind DeSean Jackson (now with the Washington Redskins) for the team lead in receptions.

The upside for McCoy owners if Sproles — and to a lesser extent Chris Polk — is used in a larger capacity, then McCoy figures to be fresher down the stretch for the fantasy playoffs. Besides, the Eagles run so many plays per game that McCoy would be well served to get an occasional breather simply from an injury-risk standpoint.

Charles, on the other hand, has zero competition for carries or receptions. Backup running back Knile Davis had 81 touches last season, the second most on the team, and Dwayne Bowe’s 57 catches, while leading all Chiefs’ wide receivers, were 13 fewer than Charles’s total.

The Chiefs drafted RB De’Anthony Thomas in the fourth round (124th overall), and while the rookie has made brazen comments regarding his skill set and expectations, the former Oregon star is buried on the depth chart and in line for similar responsibilities as Dexter McCluster, who left Kansas City to join the Tennessee Titans. That means Thomas may receive the sporadic carry or reception but will contribute primarily as a kick and punt returner.

Another angle to consider is the respective firepower elsewhere on the Chiefs and Eagles. Even without Jackson, the Birds have other potential game breakers, most notably wide receiver Jeremy Maclin, who is back after missing last season with an ACL tear.

Kansas City just doesn’t have the threats on the outside to stretch the field, so Charles basically is option 1, 1-A, 1-B and, well, you get the idea. Bowe turns 30 in September and doesn’t necessitate double-teams anymore. The Chiefs’ other wide receivers are Donnie Avery, A.J. Jenkins, Kyle Williams and Junior Hemingway.

Plus, it’s not like quarterback Alex Smith is a going to throw deep consistently. Coach Andy Reid prefers to get the ball out of Smith’s hands quickly, and there’s no better outlet than Charles to turn a short pass into a long gain.

Charles’s situation is similar to that of Adrian Peterson or Marshawn Lynch in that all three have produced despite little to no help, at least regularly, from other skill-position teammates. The difference is Charles is a superior pass catcher out of the backfield and thus frequently remains in the game even in third-and-long situations.

The Chiefs’ best opportunity to extend drives in those situations is often to get Charles the ball and let him run for the marker. The Eagles, on the other hand, have more favorable odds asking quarterback Nick Foles, who threw just two interceptions last season, to get the ball downfield.

And if you want one more reason to seal the deal, consider McCoy’s aforementioned 20-TD season. His coach for that 2011 campaign? Current Chiefs head coach Reid, who isn’t afraid to give the ball to his featured back at the goal line.

When you account for all the factors, Charles makes for the smarter pick between two very strong fantasy backs.