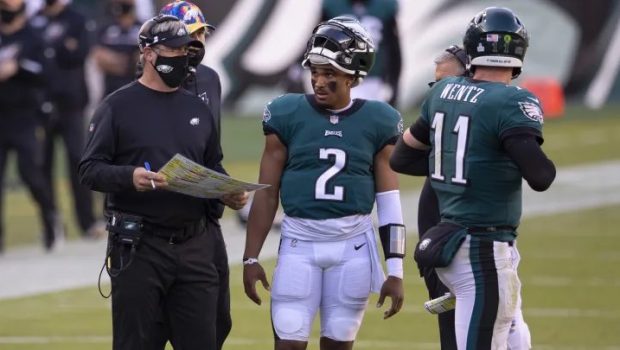 EAGLES MAY TRADE UP FROM 6TH PICK TO DRAFT A QUARTERBACK!

What it Would Take

If the Eagles are objectively evaluating what Carson Wentz and Jalen Hurts did this season without rose-colored glasses on, it makes very little sense to go anywhere other than quarterback.

With reports that Wentz wants out after he was the fifth-lowest-graded passer among starters in the NFL this season, his uncuttable contract looks like one of the worst in the league.

The worrisome thing is that for as much as the Eagles’ offense looked better with Hurts because of his legs, his passing grade was actually lower than Wentz’s. It will take a massive improvement from either will to put them close to competing in 2021.

You may be asking, “Why would the Eagles trade up if the Falcons and Bengals won’t take quarterbacks in front of them?”

The answer is that there are four other teams on this list. If you look at the difference in compensation between what the Eagles have to give up and what the Broncos — who sit at No. 9 — can offer, you’ll see their Week 17 loss to the Football Team wasn’t inconsequential.

Still, the Eagles could likely stand pat and still get QB4 in this draft class, and that might be OK with them.

That will likely be North Dakota State’s Trey Lance, who is a similar runner to Hurts and wouldn’t require a playbook change.