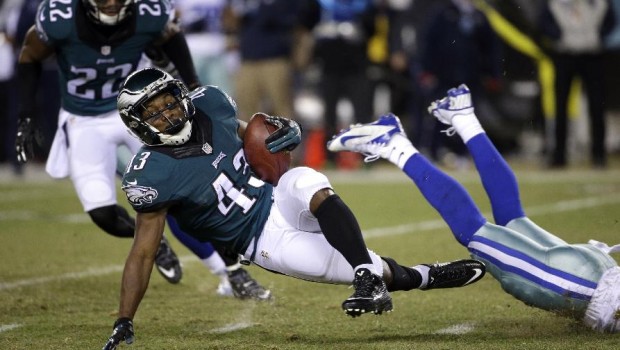 EAGLES MAY HAVE KISSED THEIR PLAYOFF CHANCES BYE-BYE

Eagles RB Darren Sproles gets knocked on his butt in the third quarter.

As it turns out, the Eagles are not exactly destiny’s darlings.

Two weeks ago they had a lead in the NFC East and fans were talking about a bye in the first round of the playoffs.

Now, after successive thumpings by Seattle and Dallas, the Birds may have kissed their postseason chances bye-bye.

Sunday night’s 38-27 loss to the Cowboys dropped the Eagles to 9-5 on the season, a game behind the Cowboys in the NFC East and, for the time being, out of the playoffs.

For the Eagles to win the NFC East, which they controlled most of the season, they need to win their final two games against the Washington Redskins and Giants and hope the Cowboys lose to the Indianapolis Colts (at home next week) or the Redskins (on the road, Dec. 28). If the Eagles and Cowboys finish in a tie, the Eagles hold the tiebreaker by virtue of a better division record.

As far as the wild-card goes, the Eagles trail the Seattle Seahaks and Green Bay Packers by a game and lose the tiebreaker to both. To catch one, the Eagles would have to win both remaining games, and the Seahawks and Packers would have to lose both of theirs. Seattle plays the Arizona Cardinals and St. Louis Rams, and the Packers play the Tampa Bay Buccaneers and Detroit Lions.

The Eagles are also a game behind the Lions (10-4), who lead the NFC North, and Philly would lose the tiebreaker to the Lions as well.

The silver lining: If the Eagles miss the playoffs, their draft pick will be higher and put them that much closer to getting Oregon quarterback Marcus Mariota, the Heisman Trophy winner.