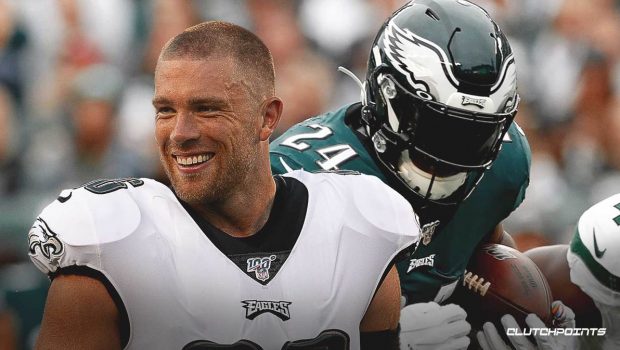 EAGLES MAY HAVE TO BEAT THE GIANTS WITHOUT ZACH ERTZ!

Can the Eagles beat the New York Giants and wrap up the NFC East and a playoff spot without tight end Zach Ertz?

According to Mike Garafolo:

Ertz came back in the game this past week, so surely he’ll be good to go vs. the Giants, right? Eh, it’s not that simple.

During last week’s crucial win over the Dallas Cowboys, Ertz sustained a fractured rib. The reliable pass-catcher was able to remain in the game and haul in four passes for 28 yards.

Over the course of the season, the Eagles have lost Darren Sproles, DeSean Jackson, and Alshon Jeffery to injuries this season. Along with those guys, Philly has also been managing injuries to Nelson Agholor and Jordan Howard.

They relied on Greg Ward, JJ Arcega-Whiteside, Dallas Goedert, and Ertz in the passing game. Even Boston Scott has seen an increased role at running back in wake of all of the injuries.

Regardless of who has been on the field, Ertz has been Carson Wentz’s go-to weapon in the offense. The seventh-year tight end has 88 receptions for 916 yards and six touchdowns in 2019.

Just last year, Ertz was able to tally a career-high 116 catches, 1,163 yards, and eight touchdowns. While he won’t reach those numbers this season, he’s still been a dependable player in the aerial attack.

For the sake of Philadelphia’s playoff hopes, hopefully Ertz is able to suit up on Sunday versus the New York Giants. In the event that he’s unable to be active for the Eagles, Goedert and Josh Perkins would likely see an uptick in snaps at the tight end position.