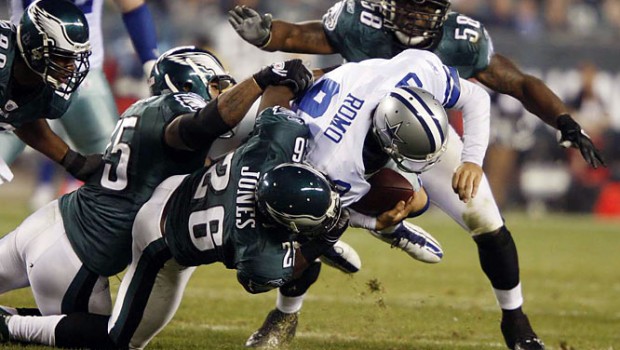 EAGLES MAY HAVE GOTTEN INTO THE HEADS OF THE TURKEY COWBOYS

Unlike the Eagles and their pragmatic coach Chip Kelly, who insists on concentrating on one game at a time, the Dallas Cowboys have been thinking about the Birds and their Turkey Day showdown for a long time.

“We prepared during our bye week for Philadelphia, so we’ve got some hay in the barn,” team owner Jerry Jones said after Dallas’ 31-28 victory Sunday night against the New York Giants.

The Cowboys and the Eagles are locked in a first-place tie atop the NFC East at 8-3. The rivals face off twice in 17 days. The stretch will define the season for both franchises. Win both, and Dallas is in the driver’s seat. Lose both, and the Cowboys likely miss the playoffs, again. Split them, and they’re still fighting.

Looking ahead isn’t something NFL coaches typically do — or at least admit publicly to doing. The perception is that by peeking at future opponents on the calendar, a franchise is at risk of overlooking the team that looms next.

That didn’t matter. During Dallas’ bye last week — a time normally reserved for recuperation and disconnection — the Cowboys sprinkled in some film work and practice reps to counteract the quick turnaround.

“We practiced maybe a few plays here and there just to kind of get a head start,” cornerback Brandon Carr said. “We see these guys twice a year. So the bye week was kind of just for us to prepare, get our feet back and get ready for this stretch we’re coming into right now.”

It almost was in vain. Sunday night, the Cowboys needed quarterback Tony Romo to lead an 80-yard drive, capped with a 13-yard go-ahead touchdown to receiver Dez Bryant, in the game’s final minute to beat the Giants (3-8). Dallas will take it, but knows it needs to improve.

“Philly is playing great football,” Romo said. “We’re going to have to play better than we did tonight to win that game.”

The Cowboys are coming off three consecutive 8-8 seasons and haven’t made the playoffs since 2009.

The building blocks are there. Dallas has a workhorse running back in DeMarco Murray, who rushed for 121 yards Sunday night, marking the 10th time in 11 games he has eclipsed the 100-yard barrier. The offensive line is among the best in the NFL, and Romo is playing at an elite level.