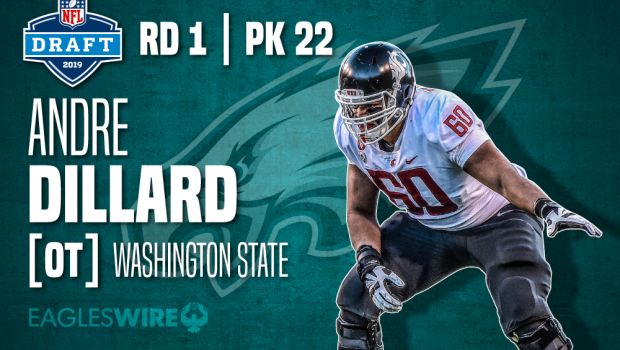 EAGLES MASTER TRADER ROSEMAN MOVED UP, GOT HIS MAN, DILLARD!

Eagles big boss Howie Roseman lived up to his rep as a master dealer last night.

Philly acquired the 22nd pick from the Baltimore Ravens and drafted Washington State tackle Andre Dillard in the first round of the 2019 NFL Draft.

In exchange for the 22nd overall selection, Baltimore received the 25th, 127th (fourth round) and 197th (sixth round) picks. The Ravens used the 25th pick to draft Oklahoma wide receiver Marquise Brown.

By hopping three picks and surrendering two late-rounders, the Birds leaped over the Houston Texans at No. 23, who were reportedly hot for Dillard.

The Wazzu lineman was the third offensive lineman taken in the first round after Jonah Williams (No. 11, Bengals) and Garrett Bradbury (No. 18, Vikings).

Dillard figures to be the eventual replacement for Jason Peters at left tackle. Peters, 37, is on a one-year deal in 2019 and has dealt with knee and quad injuries over the past two seasons.