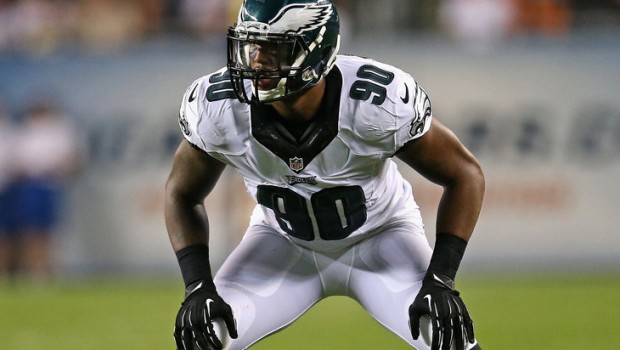 This could be the week that Eagles’ first-round draft pick Marcus Smith finally answers the critics who claimed he wasn’t good enough to be chosen first and they could have taken him in a later round.

With Mychal Kendricks, the Eagles best playmaker on defense, still out with a calf injury and very unlikely to play against the 1-2 49ers on Sunday, Smith has been filling in at inside linebacker. He actually played 16 uneventful snaps at the position last week against Washington — 16 more than he played total against Jacksonville and Indianapolis the first two weeks of the season.

Kendricks, if he were healthy, might have been a key for the Eagles this week against the 49ers mobile quarterback, Colin Kaepernick. Billy Davis, the Eagles defensive coordinator, may have even used him as a spy on Kaepernick.

Now with the athletic Smith getting some playing time inside, maybe he gets the James Bond role.

“Sometimes, in college they used me as a spy,’’ Smith said “They used me as the spy on Blake Bortles [the Central Florida QB now with Jacksonville]. Of course, Kaepernick is a lot faster, but I have experience spying guys. So, if he leaves the pocket I can go chase him down.’’

Just for the record, Bortles and Central Florida beat Smith and Louisville that day, 38-35. Bortles completed 21 passes for 250 yards and two touchdowns. But he ran just twice for 16 yards. Smith was credited with one tackle in the game.

Kaepernick is as dangerous as a runner as he is as a passer, maybe more so. Last year he ran for 524 yards for the 49ers. Thus far this season he has 129 rushing yards, which puts him on pace for close to 700.

“Kaepernick has got that running quarterback skill set with a huge arm, so he can throw it vertically, he can make any throw,’’ Davis said. “When he extends a down, he’s probably at his best. When he’s running around like the (Pittsburgh QB Ben) Roethlisbergers of the world and those guys that can get out of the pocket and find the open receiver and have the big arm to get it there.

“So we’re back to where we have to defend him as a runner and him as a thrower, him in the pocket, him out of the pocket. It just stretches you out a little bit that you have to defend more things when you’re dealing with a quarterback of his talents.’’

So maybe Smith gets the call. One of the things he has shown he can do is run.

“What I learned from (spying) is you can’t overplay it,’’ Smith said. “You have to be able to. . .if he gets out of the pocket you have to be over there on him. You can’t be caught by the center or one of the guards. You know he can change the game, that’s how Kaepernick is.’’