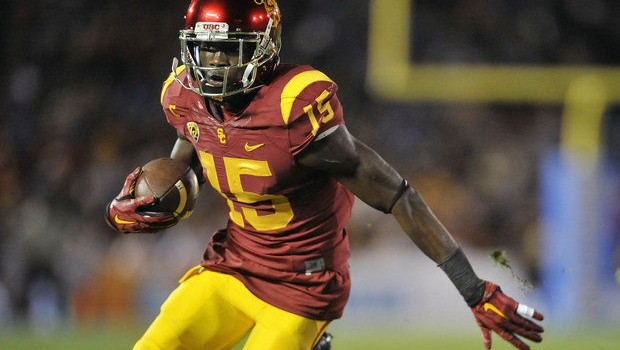 He came to America from Nigeria when he was 5, learned football well enough to get a scholarship to football power Southern Cal, was drafted last week by the Eagles as the 20th pick overall.

And today he became a millionaire!

The deal is for four years and $9.377 million with a signing bonus of $5.1 million and $8.8 million in guarantees, NFL Media Insider Ian Rapoport reports, via a source who has seen the contract. As is the case with all first-round picks, the team will hold an option for the fifth year.

The former USC star is viewed as a pro-ready route runner with impressive run-after-catch ability. At 6-foot-0 and just under 200 pounds, those attributes would make him an ideal fit as a “Z” receiver opposite the traditional “X” or No. 1 receiver.

In Chip Kelly’s offense, however, the Eagles prefer to move their receivers around the formation, leaving room for flexibility.

Jordan Matthews will enter offseason practices atop the depth chart, with Agholor battling Riley Cooper, 2014 third-round pick Josh Huff and veteran Miles Austin for snaps on the outside.

If Agholor shows enough promise to slide into the spot in which DeSean Jackson and Jeremy Maclin excelled the past two years, he will be in the running for Offensive Rookie of the Year honors.