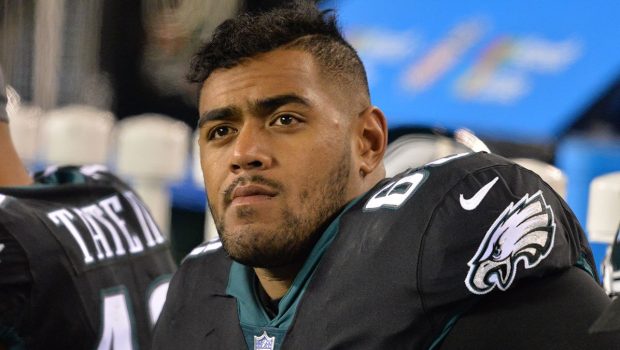 There’s a play from the Eagles’ Week 6 loss to the Baltimore Ravens you might have seen.

It starts as a typical zone read, as the Eagles offensive line blocks to the right and quarterback Carson Wentz chooses not to hand the ball off because the backside defensive end is crashing down to stop the run. Reading that, Wentz pulls the ball and starts running to his left, then lowers his shoulder into Ravens safety DeShon Elliott 5 yards beyond the line of scrimmage. As another Ravens defender joins the tackle, the ball pops loose from Wentz’s control onto the ground, where Ravens safety Chuck Clark scoops it up. Then comes the fun part.

As Clark gathers possession and starts running, a 6-foot-8 behemoth barrels into the frame and, in one perfectly trained, fluid and violent motion, launches himself at Clark’s chest while swinging his arm around for a thunderous left hook that catapults the ball out of Clark’s possession.

Only one player in the NFL is capable of making such a play:

Jordan Mailata, the Eagles’ 23-year-old ex-rugby player turned offensive lineman. That’s not how he wants to be known anymore, though. Now, he wants to be judged on his merits as a football player, and things are going pretty well on that front. That doesn’t mean he can’t still call on his rugby past when the opportunity presents itself.