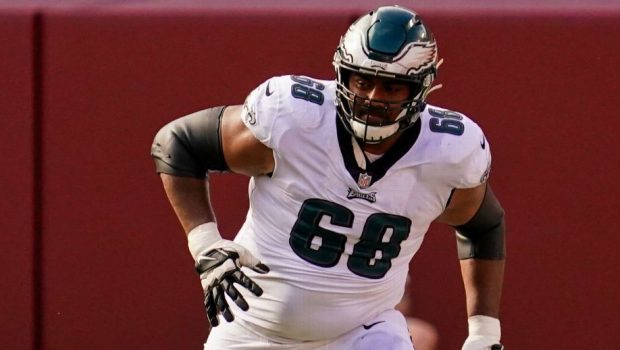 Eagles left tackle Jordan Mailata made a lot of fans Sunday night when he started at left tackle for the injured Jason Peters and played competently.

It wasn’t just his first start in the pros, but ever as a football player.

Mailata, the former Australian rugby player, said he had some jitters but once he made it past the first series, the anxiety dissipated and he “felt like I was at home.”

“I thought there were some really good things [Sunday] by him,” said Eagles coach Doug Pederson of the 6-8, 346-pound Mailata. “He’s a big man, obviously; he’s strong. And when he is one hundred percent accurate on what he’s doing on that particular play, it’s hard for defenders to get around him, whether it’s a pass block or a run block, when he’s right.”

This is his third season and Philly’s legendarily critical fan base was clamoring for him to play or go home.

He had a back injury last season and had some rough moments at training camp this summer.

And the Eagles only played him because of injuries to Andre Dillard, the team’s 2019 first-round pick, and the 38-year-old Peters.

Mailata committed a false start on a third-and-1 that stalled a promising drive — but he hasn’t allowed a sack in 82 snaps this season.

“He’s still a work in progress; he’s still like a ball of clay that we’re shaping and molding and making into a left tackle,” Pederson said.

Mailata will start again Sunday at the Pittsburgh Steelers, and he made clear he intends on being more than a place-holder until Peters gets healthy.

“I’m not trying to fill anyone’s boots. I’m trying to make my own boots,” he said. “That’s the one thing I came here to do: try and put some respect on my name, and tell people that I’m not a rugby player anymore. I’m a footballer.”