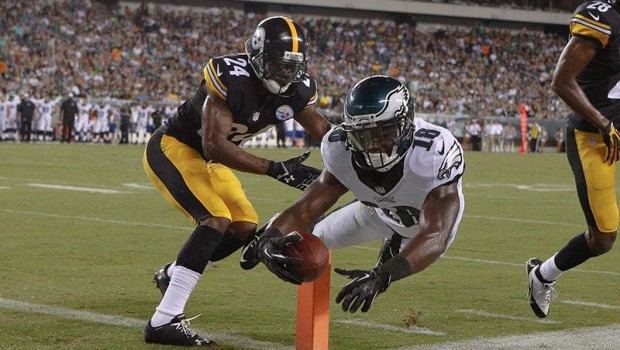 EAGLES' MACLIN READY FOR HIS MAKE OR BREAK SEASON

Jeremy Maclin is about to reintroduce himself to NFL defenders, and when the Eagles open the regular season against Jacksonville at the Linc on Sept. 7 all eyes will be on No. 18.

Maclin (photo above last Thursday against the Steelers), who tore his right anterior cruciate ligament one year ago in a non-contact practice drill, returns as the most likely candidate to replace the production of former Eagles Pro Bowler DeSean Jackson, who was released in March on the heels of a career season.

“If they plan on me being a big part of the offense like I think they are, I think the numbers will come,” Maclin, who’s entering his sixth NFL season, said Friday.

“I’m not going to get wrapped up in all of that, so that’s how I’m approaching the season.”

Maclin’s best statistical effort came in his second season when he posted 70 catches for 964 yards and 10 touchdowns, all of which remain career bests. Jackson, by comparison, caught 82 passes for 1,332 yards and nine touchdowns last year, the team’s first under coach Chip Kelly.

Maclin has solid help in the Philly receiving corps. The Eagles re-signed wideout Riley Cooper, who is expected to build on his 835-yard, eight-touchdown season in 2013, added pass-catching tailback Darren Sproles and drafted receiver Jordan Matthews in the second round.

But the 2014 campaign will probably determine Maclin’s future with the Eagles. Before his injury, Maclin was headed into the final season of his rookie contract and hoping to secure a long-term extension. But the Eagles did give Maclin a one-year, prove-it contract this offseason.

There were rumors that Maclin and Jackson didn’t get along, but the two had a chance to speak at Eagles running back LeSean McCoy’s charity basketball game over the summer.

“It’s weird that we’re not teammates,” Maclin said. “But it’s not awkward. One thing about being a professional football player, you have to know how the business works. We kind of just talked about that and caught up a little bit, but there was never hard feelings between either one of us, or anything negative going on. It is what it is. I think he’s happy to be where he’s at. And I think he’s ready to go over there and bounce back a little bit.”

The Eagles can only hope Maclin rebounds, too.

“I felt good going into last year, and it was a freak accident and those things happen sometimes,” he said. “I feel good, healthy. I’m just looking forward to getting out and playing football.”