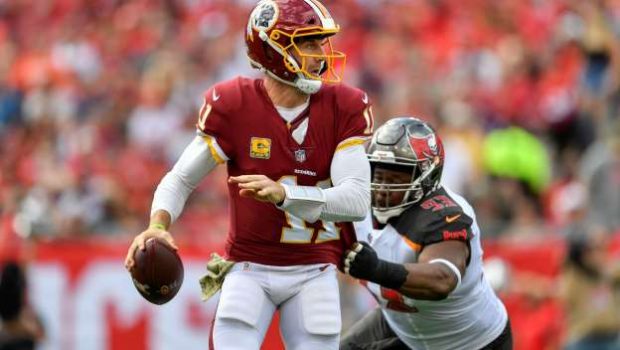 EAGLES LUCKY TO DRAW REDSKINS IN WEEK 17: HERE’S HOW THEY BECAME A DUMPSTER FIRE!

What Went Wrong, says the Ringer.com:

Washington has more players on injured reserve than any other team.

Starting quarterback Alex Smith (above) suffered a gruesome broken right leg against the Houston Texans on November 18 that became infected after multiple surgeries.

Smith was released from the hospital on December 16, four weeks after the injury, and his readiness for next year—and perhaps beyond—is in limbo.

Just two weeks after Smith’s injury, backup Colt McCoy also broke his right leg. (At one point Smith and McCoy’s hospital rooms were next to each other.)

The team was 6-3 with a healthy Smith under center; they fell to 1-5 since he suffered his injury, including the Texans loss.

Thirty-three-year-old Adrian Peterson, who has had shoulder and ankle injuries since October, has somehow been Washington’s healthiest running back.

Second-round pick out of LSU Derrius Guice tore his ACL in August, Robert Kelley landed on IR with a toe injury in September, Chris Thompson suffered a rib injury in October that cost him multiple games, and running back Samaje Perine suffered knee and calf injuries that have kept him out since mid-November.

The pass catchers were not spared, as Paul Richardson finished the year on injured reserve (AC Joint) and tight end Jordan Reed may join him with a toe injury after nearly finishing the first full season of his career.