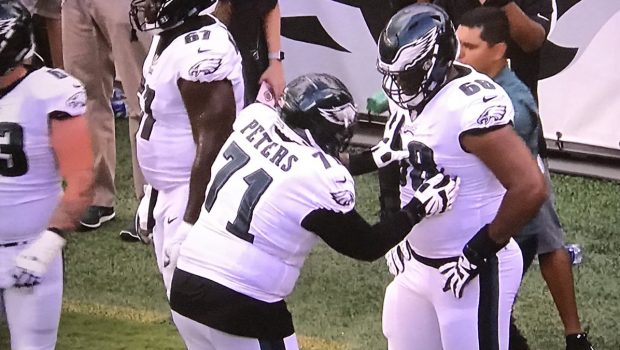 EAGLES LT PETERS HAS LOST HIS JOB TO MAILATA — MAYBE FOR GOOD!

Eagles legendary left tackle Jason Peters is on IR because of a foot injury.

And coach Doug Pederson won’t commit to Peters getting his starting left tackle job back if and when he’s healthy.

He’s eligible to return Nov. 1 against the Cowboys.

“In the case of Jordan Mailata, as long as he plays well? Right now? In the near future? Obviously, it’s his job,” Pederson said. “But at the same time, we understand that when J.P.’s healthy, that’s a decision that we’re going to have to make at that particular time.”

Not too long ago it would have been absurd to even consider having a healthy Jason Peters on the bench, especially behind a 7th-round pick with no football experience on any level in his life.

But things have changed.

It was only one game, but Mailata emerged Sunday as a legitimate NFL offensive tackle, and Peters did not look anywhere close to vintage Jason Peters in his three starts at left tackle.

The Eagles initially brought Peters back to play right guard in place of Brandon Brooks, then moved him to left tackle — and eventually gave him a pay raise — when Dillard got hurt.

Center Jason Kelce is the only Eagles offensive lineman to start all four games at the same position. Herbig has started two at right guard and two at left guard.

The Eagles have used four starting O-lines in four games for the first time since 1950, which is as far as available records go. They’ve used eight different starting offensive linemen.

One option when Peters does return is keeping Mailata at left tackle and moving Peters back to right guard, where he’s probably a better option than Pryor.

“Obviously, we want to make sure he’s 100 percent with the injury that he has,” Pederson said. “He’s doing really well in his rehab. No timetable on his return at this time.”

Mailata didn’t learn he was starting against the 49ers until Saturday, so this will be the first week he’s gotten all the reps with the first offense in his career.

The Eagles face the Steelers at Heinz Field on Sunday. The Steelers rank No. 1 in the NFL in sack percentage (one sack for every 7.3 opposing pass attempts).