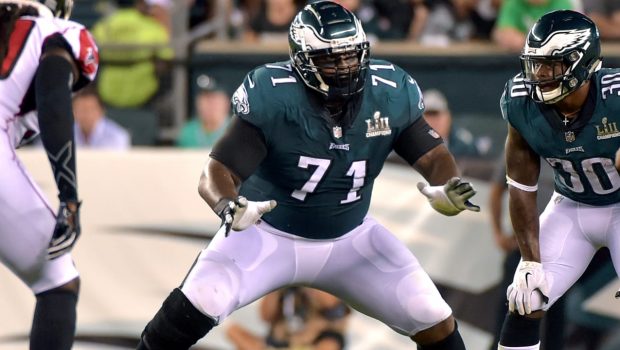 COMEBACKING EAGLES LT JASON PETERS LIVING UP TO HIS LEGEND!

Eagles All World left tackle Jason Peters went down in last season’s Week 7 with an ACL and MCL, and he missed the rest of the Super Bowl season, not to mention the big game.

He rehabbed diligently, but at 36 his body should not have been able to come back to full strength.

He didn’t play in any of the exos, but he worked his ass off in every practice.

And, last Thursday night against the Falcons in the season opener, JP played 71 of the 72 offensive snaps against outstanding edge rushers Vic Beasley and Takk McKinley.

“Pretty amazing that a guy can miss all that time and step right back into one of the premier positions in the National Football League like JP did for us,” offensive coordinator Mike Groh said yesterday. “We know he’s just going to keep getting better week in and week out now that the games have started and he gets back out there and knocks a little bit of the rust off. For Week 1, he played really well.”

Peters isn’t one to talk about his exploits and, letting his play do the talking.

“Having Jason on the field makes all of us better,” center Jason Kelce told the team’s website. “The guy is one of the best to ever play the game. He’s a perfectionist. You know that he’s got it all covered when he’s playing left tackle.”

Former NFL offensive lineman Ross Tucker, now an analyst with Sirius NFL Radio and SportsRadio 94WIP, was a teammate of Peters in 2004 when the 6-4, 315-pound Peters was an undrafted rookie with the Buffalo Bills.

“He was on the kickoff and punt teams as a rookie as a 315-pound tight end and it was like the scariest thing you’ve ever seen,” Tucker said. “A 315-pound guy who could run and you could tell that nobody wanted a piece of him. We were playing Cincinnati, making a playoff push, and he busted through the punt team, blocked the punt, and scooped it up for a touchdown. I mean, it was incredible. He had been bumped up from the practice squad and was an absolute demon on special teams.

“At the same time, he started practicing just a little bit on the offensive line and the first day they had him do one-on-ones, he was our best pass blocker. The first day he had ever done it in his life. We were all looking at each other going, ‘What in the heck is going on?’ I had been doing it since sixth grade, and he was better than me in six seconds. It was crazy.”

Eagles big boss Howie Roseman was part of the personnel staff when the Eagles traded a 2009 first-round draft pick, a fourth-rounder that year, and a sixth-round pick in 2010 to Buffalo to acquire Peters. He stepped right in and replaced the great Tra Thomas, whom the Eagles had allowed to reach free agency a month earlier. Thomas signed quickly with Jacksonville and the Eagles traded for Peters, and the line of succession at left tackle continued.

“I’m very glad that I was teammates with him and that I had a chance to witness all of that. There’s no way that, in 2004, that oh yeah, in 2018 I’ll be doing the Eagles’ pregame (radio) show and he’ll be a 36-year-old future Hall of Fame tackle,” Tucker said. “It’s remarkable. He’s a rare, rare athlete and player. We’re all fortunate to still have the chance to watch him because players like him don’t come around very often.”