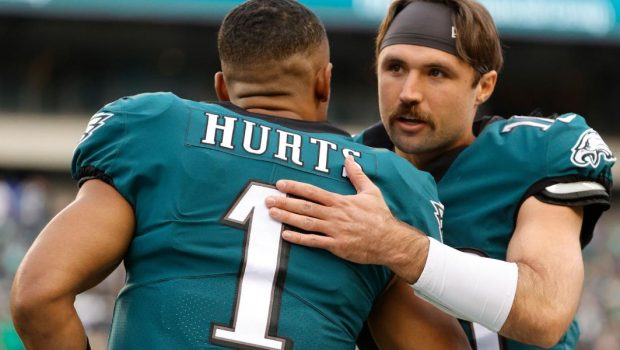 EAGLES LOVE JALEN HURTS AT QB — UNTIL A BETTER ONE IS AVAILABLE!

Whenever Eagles GM Howie Roseman is asked about quarterback Jalen Hurts, he reverts to his default position:

Even though Roseman and owner Jeff Lurie not so secretly coveted DeShaun Watson and probably feel the same way about Kyler Murray.

If the Birds could have somehow gotten either one, Hurts would be gone in an Alabama minute.

Why can’t they just tell the truth.

It’s the easiest thing to remember.

Instead, Roseman reverts to his default marketing posotion, as he did yesterday.

When asked about drafting a quarterback in the 2023 NFL Draft, Roseman said, “We’re excited about Jalen Hurts.”

Roseman added, “We’re gonna support Jalen and want him to have a great career in Philly.”

He noted that the move to acquire the Saints’ 2023 first-round pick was about increasing the team’s flexibility. Could that flexibility be used to draft a quarterback next year? Definitely. However, the Eagles appear committed to setting up Hurts for success with their pair of first-round selections in the upcoming draft. The second-year passer got Philly back into the playoffs last season and a similar performance in 2022 would almost certainly secure him a third year as the starter. After posting a 139/784/10 rushing line in 2021, Hurts is destined for another QB1 season unless he takes a step back as a passer.