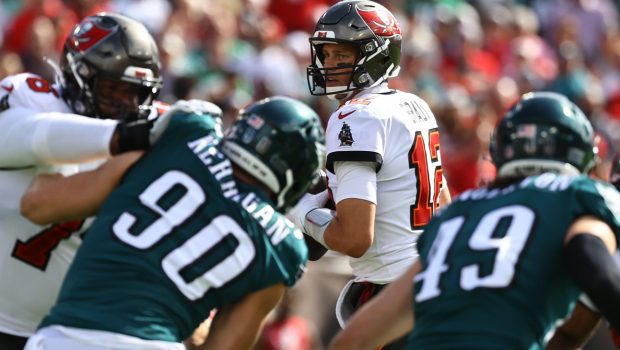 EAGLES LOST TO GOAT BRADY AND BUCS — NOTHING TO BE ASHAMED OF!

Many people thought the Eagles had a chance to be competitive in Tampa Bay on Sunday against the Buccaneers.

The Eagles played the Buccaneers earlier in the season, in Week 6, losing 28-22, and it was believed that Philadelphia could learn from their mistakes.

However, it was all Tampa Bay on Sunday at Raymond James Stadium.

Even though the Eagles are done, you can still get a great Caesars Sportsbook Promo Code to bet on the remainder of the NFL playoffs.

Caesars has one of the best odds, like with the Eagles at +8.5 in their Wild Card game. Most books fluctuated lines down to seven by kickoff, but Caesars took care of Philadelphia bettors.

However, the game belonged to the Buccaneers, and no spread would save Philadelphia. Tampa Bay was -8.5 according to Caesars Sportsbook, and the team prevailed by a 31-15 margin. The whole first half belonged to Tom Brady and the Buccaneers.

Man this is not the way I wanted this to end. Proud of every man on this team. Grateful for this journey we been on, it showed the character of this team. We fight, we don’t quit! I have so much love for this city. I appreciate all the Eagles fans for cheering us on this season!

The Buccaneers put the pressure on the Eagles from the opening kickoff. There was never a response from Philadelphia, and this lack of competitiveness was their ultimate downfall.

Tom Brady was the king of the field today. He looked like the MVP quarterback that we have seen all season. He set the tempo early and dominated the Eagles all day.

Brady was 29 of 37 for 271 yards and two touchdowns. He led two long touchdown drives to start the game and then finished his day with TD passes to Rob Gronkowski and Mike Evans. Brady is now 35-11 in his 46 postseason starts. The man is a winner and made Buccaneers’ spread bettors very happy.

Brady was not the only star of the show on Sunday. The Buccaneers’ defense also played one of their best games of the season. This looked like the Tampa Bay defense that we saw last season in the Super Bowl against Patrick Mahomes and the Chiefs.

Following the game, Brady said, “It only gets tougher from here. We did some good things. I think we’re just going to have to keep doing what we did today. Everyone’s got to touch it, make some explosive plays. Did a good job possessing it, the defense played great, so it was a great team win. Special teams played awesome — one of the best days we had on special teams all year.”

Mike Evans stepped up for the offense on Sunday as well. Tampa Bay’s offense has been depleted because of an injury to Chris Godwin earlier in the season and the Antonio Brown debacle. Brown walked off the field in Week 17 against the Jets and was immediately fired.

The Eagles were outmatched in every phase of the game. This was especially true for the team on offense. Jalen Hurts and Philadelphia’s squad had no answers for the Buccaneers’ defense.

Hurts was the youngest quarterback in Eagles history to start a playoff game, and his age showed. Hurts was not ready for the moment, completing 23 of 43 passes for 258 yards with one touchdown and an interception.

The interceptions were killer for the Eagles, and they struggled in multiple game areas. The Eagles were 5 of 14 on third down and 1 for four on fourth down. They also turned the ball over three times, compared to the Buccaneers, who did not give up the football at any point.

It was a successful season for the Eagles, who nobody expected to do much under a new head coach. However, the team still has a lot of work to do in the offseason to get over the hump.