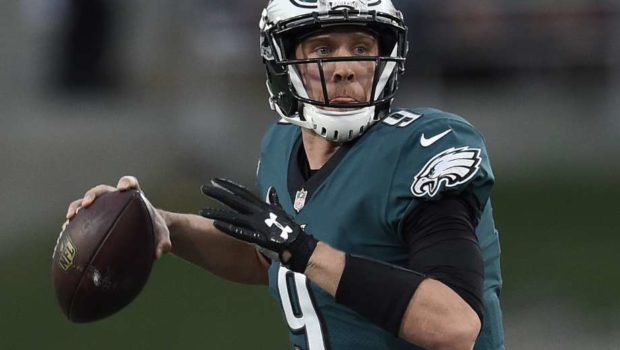 If the NFC championship game eventually features the Rams against the Eagles, they won’t play as intense or entertaining a game as they did today in the L. A Coliseum.

The Rams rallied to take the lead in the second half but were hurt by a late Jared Goff fumble and lost 43-35 to the Eagles, who improved to 11-2 as they locked up the NFC East title..

The Rams, down by two points, had the ball with 3:45 remaining in the fourth quarter, but failed to get a first down and punted. The Rams had three timeouts to use on defense, but a big catch for a first down by Eagles receiver Nelson Agholor (USC) all but destroyed the Rams’ hopes of a comeback.

In a showdown between Goff and Carson Wentz, the top two picks in the 2016 draft, only one of them finished the game. Wentz, the Eagles’ star quarterback, suffered a knee injury late in the third quarter, when the Eagles took a 31-28 lead, and did not return to the game. He left with 291 yards and four touchdowns passing.

NFL.com reported after the game that Wentz suffered an ACL injury, and could be lost for the season.

The Rams (9-4) took the lead at 35-31 on a 1-yard touchdown run by Todd Gurley, 1:02 into the fourth quarter, and then faced their former quarterback, Nick Foles (above), who was jettisoned in 2016 after the Rams decided to trade up and draft Goff.

Jake Elliott made another field goal, from 33 yards, to give the Eagles a 37-35 lead with 3:45 remaining. The Eagles added a touchdown in the final seconds when the Rams attempted an ill-advised lateral on a kickoff return, and the Eagles’ Brandon Graham stole the ball and danced into the end zone.

In an entertaining game, Gurley rushed for 96 yards and two scores on 13 carries and Goff completed 16 of 26 attempts for 199 yards and two touchdowns.

The Rams likely suffered a major loss in the first quarter, when starting cornerback Kayvon Webster had to leave the field on a cart after a non-contact injury. The Rams officially said Webster suffered an ankle injury, but Webster appeared to reach for the area near his Achilles tendon immediately after he fell.

Then, in the second quarter, starting left tackle Andrew Whitworth suffered an ankle injury. Whitworth was able to return for the start of the third quarter with the ankle heavily taped.

That third quarter turned wild, and started with a great drive by the Rams, who went 70 yards in six plays and narrowed the Eagles’ lead to 24-21 on a 1-yard pass from Goff to Sammy Watkins.

The Rams then forced a three-and-out punt, and blocked that punt, as Mike Thomas sent the punt flying backward and Blake Countess grabbed it and returned it for a touchdown and gave the Rams a 28-24 lead 5:03 into the third quarter.

Philly then went on a 15-play, 75-yard drive, and took a chance on a fourth-and-goal play from the Rams’ 3. It worked, as Wentz connected with Alshon Jeffery for a touchdown and a 31-28 lead for the Eagles with 2:20 left in the third quarter.

The game also had a wild start, with a first quarter that included plenty of offense, as expected, and an outstanding start for the Rams.

The Rams took over on the Eagles’ 40 and scored three plays later, on a Todd Gurley 2-yard run, and took a 7-0 lead only two minutes into the game.

The Birds dominated for a while though, and scored touchdowns on its next three possessions. Wentz looked great when given time to throw, as he stepped up in the pocket and used the middle of the field particularly well.

The Eagles took a 14-7 lead with three minutes left in the first quarter on a 20-yard touchdown pass to Trey Burton, and then 4:50 into the second quarter, Wentz and Burton connected again, for an 11-yard touchdown and a 21-7 lead.

Seemingly in danger of getting blown out, the Rams responded, thanks in large part to rookie receiver Cooper Kupp. Kupp caught a 64-yard pass on third down, then caught a 6-yard touchdown pass to pull the Rams within 21-14 with 9:24 remaining in the first half.

The Rams tightened up on defense and had two chances to tie the game late in the first half, but failed on both, and the Eagles drove the ball 80 yards in the final two minutes of the half. The Eagles had to settle for a 22-yard field goal, which gave them a 24-14 halftime lead.