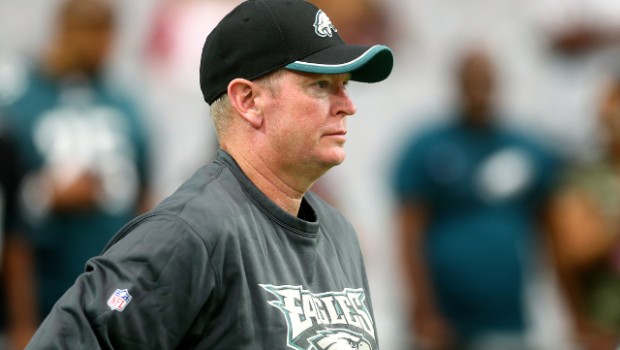 EAGLES LOSE QB COACH TO RAIDERS; MUSICAL CHAIRS FOR OTHERS

The Eagles thought they would bundle the news of their coaching changes on Monday afternoon, and just as they were doing so quarterbacks coach Bill Musgrave was announced as the Oakland Raiders’ new offensive coordinator.

John Lovett, the team’s defensive backs coach since 2013, and Ted Williams, the Eagles tight ends coach for the last two years, will both now work in the team’s pro scouting department.

The 43-year-old Undlin most recently worked as defensive backs coach of the Denver Broncos from 2013-14 and as the Broncos defensive quality control coach in 2012.

Before his tenure in Denver, Undlin spent three seasons with Jacksonville under Jack Del Rio, coaching the club’s defensive backs for two years and spending another season as a defensive assistant working with the defensive line and outside linebackers.

He also coached four seasons in Cleveland (2005-08) and one year with New England (2004), where he worked primarily with the secondary with both teams.

Undlin began his coaching career at his alma mater, California Lutheran University, where he coached linebackers from 1998-99 before being promoted to defensive coordinator in 2000. From 2002-03 he served as a graduate assistant at Fresno State University working with the team’s secondary.

A defensive back for California Lutheran from 1990-94, Undlin earned his bachelor’s and master’s degrees from the school.

In Peelle’s two seasons as an assistant tight ends coach, the Eagles offense has been one of the most productive in the NFL as they rank 2nd in points, total yards, and rushing yards and 1st in plays of 20 yards over that time period. The tight end group has been productive along the way. Veteran Brent Celek had 32 catches in 2013, 2nd-year pro Zach Ertz ranked third on the team with 58 receptions for 702 yards, while James Caseycontributed with two touchdowns.