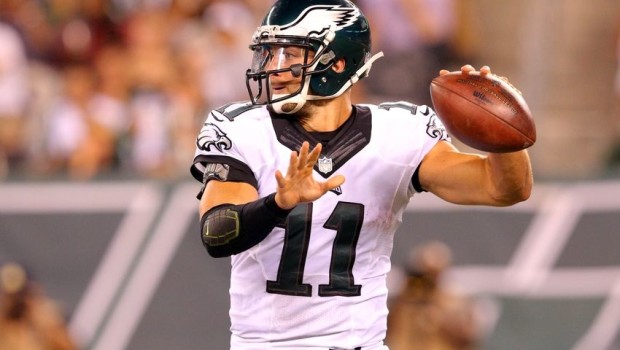 EAGLES LOSE, BUT TIM TEBOW IS A BIG WINNER!

You can’t say that last night’s fourth Eagle exo was devoid of drama!

In every other year, the fourth preseason game had been a workout for the scrubeenies — a chance for long-shots to impress the coaches and make the team.

Such as Tim Tebow!

So when the Eagles’ third-team offense scored against the Jets’ second-team defense just before halftime Thursday night, it should not have stunned many on either sideline.

The crowd at MetLife Stadium, however, sat in dumbfounded silence. Who threw that 18-yard touchdown pass?

With the Jets in 2012, Tebow never threw for a touchdown. He never ran for one or caught one, either, as the team tried finagling him into ill-suited positions as a hybrid runner-receiver. For all the preseason hype, the jersey sales, the circuslike news media coverage and the Wildcat hysteria, Tebow’s 13-month tenure in New Jersey was a cautionary tale rather than a fairy tale.

He spent the past two seasons out of football before the Eagles gambled on him, and here he was again Thursday, fighting for a roster spot in the preseason finale, which the Jets won, 24-18.

Alternating quarters with Matt Barkley — his competition for the Birds’ third-string quarterback spot — Tebow entered in the second quarter and ignited the Eagles’ offense, throwing for 105 yards and a touchdown in the period for a passer rating of 129.2.

Neither team played its starters, and Jets fans were not treated to a second reunion as Eagles quarterback Mark Sanchez remained on the sideline. But Tebow (189 yards) clearly outshone Barkley, who threw an interception on the game’s second play and finished just 4 of 9. Whether it will be enough to help Tebow make the season-opening roster remains to be seen.

“I’m not going to worry about what I can’t control,” Tebow said. “It’s a blessing to be able to come out here and play the game I love. It was a lot of fun out there.”

The Jets also have a quarterback battle for the primary backup spot behind the starter Ryan Fitzpatrick. Matt Flynn started the game and looked terrific early, leading a 54-yard opening drive that he capped with an 18-yard touchdown pass to Chris Owusu.