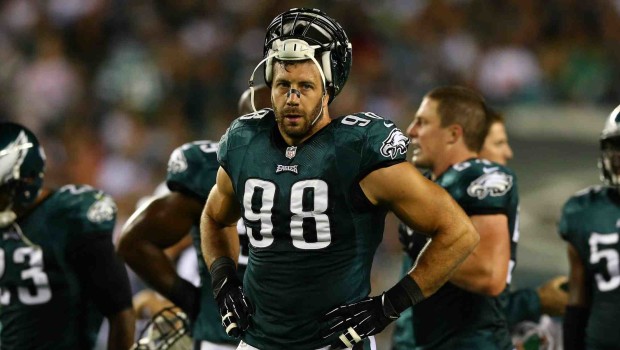 Philly will need a pass rush upgrade from linebackers like Connor Barwin.

The dust has settled on a boring pre-season and the Eagles are focused on next Sunday’s regular season opener with the Jacksonville Jaguars at the Linc.

So, where exactly do the Birds stand six days before the Jags come to town?

Their starting right tackle, Lane Johnson, will miss the first four games while he serves a PED suspension.

Their first-round pick, outside linebacker, Marcus Smith, is a project who doesn’t look like he will to be able to make much of a contribution this season.

Aside from that, though, the Birds seem well-positioned to win their second straight NFC East title and make a deep playoff run in Chip Kelly’s second season as head coach.

Kelly took over a 4-12 team last year and guided it to 10 wins and a division title. There’s no reason to believe they can’t be at least as good, and probably better, this season.

The Eagles made it through the summer with no major injuries. They have the league’s most athletic offensive line and a quarterback — Nick Foles — who led the league in every pertinent passing category last season. They brought in backup insurance for Foles, signing former Jet Mark Sanchez, who has 68 career starts.

Kelly also traded for versatile running back, Darren Sproles, who will back up league rushing champ LeSean McCoy and be used as both a runner and pass-catcher. Kelly feels having Sproles will make it difficult for opposing defenses to play as much man coverage against them as they did last season.

Kelly also is looking for big things from second-year tight end Zach Ertz and second-round rookie wide receiver Jordan Matthews. The 6-foot-3, 212-pound Matthews will be used in the slot, where Kelly thinks he’ll be able to take advantage of smaller nickel corners.

The Eagles improved their secondary with the free-agent additions of safety Malcolm Jenkins and corner Nolan Carroll. Jenkins is a starter and Carroll gives the Eagles depth at a position they didn’t have any last season.

The one lingering question heading into the Eagle season is their pass rush. They had just 37 sacks last season and finished 31st in sacks per pass play. They were among the worst third-down defenses in the league.

They had hoped Smith would be more NFL ready by this point, but that’s not the case. That means they’re going to have to get bigger pass-rush contributions from people like linebackers Trent Cole and Connor Barwin and Brandon Graham, and defensive end Fletcher Cox.