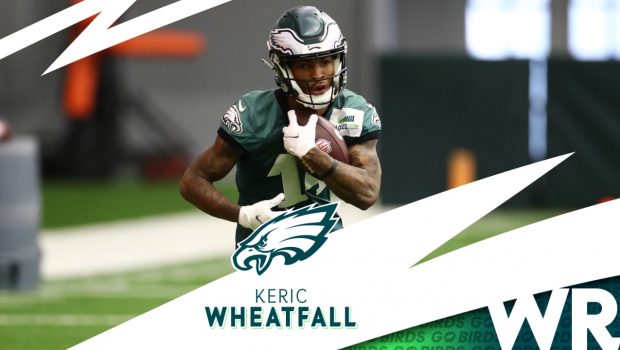 That wasn’t Monday’s big news. After all, the Birds made Dean their third-round pick in April’s draft, and they are expecting big things from the stud from Georgia.

No, the bigger news was that they signed wide receiver Keric Wheatfall, a rookie out of Fresno State who participated in the Rookie Minicamp on a tryout basis.

Here’s what you need to know about the newest rookie free agent from the Eagles web site:

Born in Brenham, Texas, Wheatfall was an all-district player at Cypress Ranch High School in Cypress, Texas, where he caught 30 receptions for 535 yards and five touchdowns as a senior, helping his team earn an 11-1 record. He was also a member of the track team.

Wheatfall started his college career at Blinn College before transferring to Fresno State. At Blinn, Wheatfall had 798 yards and six touchdowns on 47 receptions in 2018, including four 100-yard receiving games.

In three years at Fresno State, Wheatfall compiled 78 receptions for 1,286 yards and six touchdowns. This past season, Wheatfall was third on the team with 38 catches, 616 receiving yards, and four touchdowns.