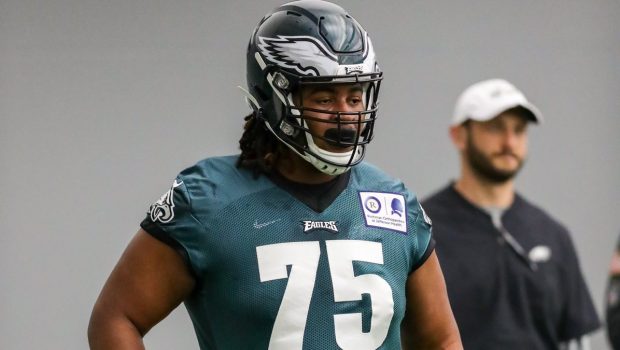 EAGLES LIKE WHAT THEY’VE SEEN FROM UDFA GUARD JOHNNY GIBSON!

The Eagles are tweaking their offensive line a bit.

Johnny Gibson, a two-year starter at Arkansas, wasn’t selected in the 2019 NFL Draft.

But the 6-4, 319-pound guard participated in last weekend’s rookie mini-camp and the coaches liked what they saw.

Over his college career, Gibson surrendered just nine sacks in 1,950 total snaps with 1,012 in pass protection.

A walk-on at Arkansas, he started the final five games of his redshirt sophomore season in 2016. Prior to the Belk Bowl that year, he was put on scholarship.

In 2017, Gibson played a team-high 807 offensive snaps with six starts at right guard, four at right tackle, and one at left tackle. As a senior, Gibson settled in at right guard and only allowed two sacks in 762 snaps.

The Dumas, Arkansas native was a two-way player in high school playing along both lines of scrimmage.