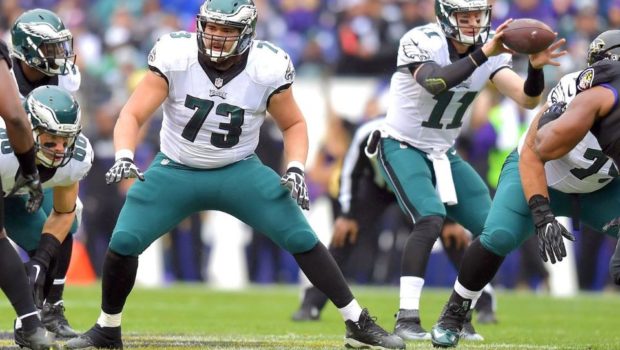 WHY EAGLES LIKE IKE: SEUMALO PLAYS GUARD, CENTER AND TACKLE!

If you wonder why second-year lineman Ike Seumalo is one of the Eagles’ prized players as training camp opens this Sunday:

He has started at both guard spots as well as right tackle. But his best position might be center.

As it is, he’s the only player on the roster the Eagles can trust to plug into any spot along the line, including tight end.

“He played a lot of football in his first year,” offensive line coach Jeff Stoutland said, “and I think just that experience and understanding each of those positions and the angles that we need to take, he’s a very intelligent player.

“So I love him. I love coaching players of his magnitude. They have talent, they’re smart. Really all you do is coach him one time on something and he pretty much has it.”

Seumalo’s best performance may have come on the day he played right tackle against the Baltimore Ravens last season. But Stoutland sees Seumalo’s future as being inside.

“I think he can [play tackle],” Stoutland said. “I think he can get you out of a game and you can win in a game playing with him there. But I think an inside position is more suited for him.”

No matter, Seumalo in barely more than one calendar year has established himself as the most versatile player on the offensive line. He’ll open training camp next month as the frontrunner to start at left guard, which ironically was the only line position he never played in college at Oregon State.

Whatever progress the Eagles’ line might make this season, it’s a good bet Seumalo will have a lot to do with it.